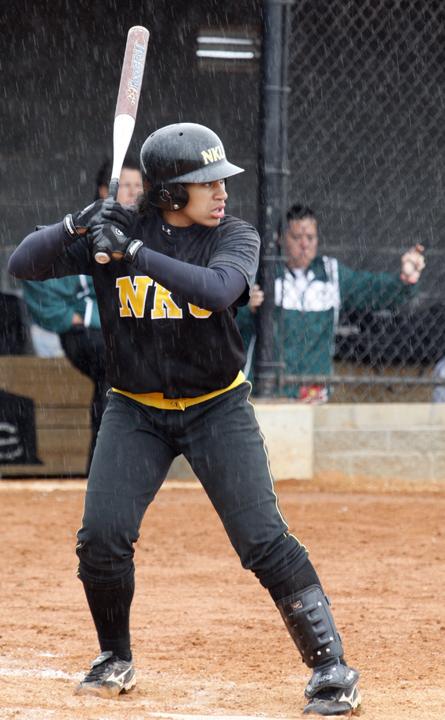 The Norse (24-20, 12-10 in the GLVC) scored four runs in the bottom of the second to take an early lead.’ Freshman shortstop Jessica Farris picked up an RBI after Flyers pitcher Courtney Lyons loaded the bases. Senior first baseman Amanda Smith slammed a double to left field, which knocked in three runs to cap off the inning.

Lewis struck for one run in the top of the third.’ It would be the only run that crossed the plate for the Flyers.

NKU added another run in the bottom of the fourth, stemming from a single by sophomore Gretchen Lorenz.’ Farris picked up her second RBI of the day after doubling down the line.’ It gave the Norse a 5-1 lead over Lewis.

Game 2 of the series belonged to the pitchers for both clubs.’ Sophomore pitcher April Ehlers pitched a complete game and an extra inning to help the Norse grab the victory.

The only run that scored in the game came in the eighth inning when Farris doubled down the left field line.’ Smith was intentionally walked and senior left fielder Shatona Campbell drew a walk of her own to load the bases.’ Senior Cara Parker recorded a sacrifice fly to send Farris to the plate, ending the game 1-0 in favor of the Norse.

Farris hit over .400 for the week and collected 11 RBI’S.’ Farris was named GLVC player of the week for her solid offensive performance to help NKU clinch a playoff birth.

‘I was pretty suprised, I wasn’t expecting it at all,’ she said. ‘I never thought I’d win it. I’m pretty excited.’

The Norse completed the weekend with a two-game sweep of GLVC foe Wisconsin-Parkside (17-19, 9-11 in the GLVC) on April 19 at Grein Softball Field.

Game 1 of the series saw NKU put 12 runs on the board to claim the victory.

The Rangers pushed across a run in the early going to take a 1-0 lead.

The Norse answered swiftly in the bottom of the first off of back-to-back home runs.’ With two outs in the inning, Campbell powered the first pitch she saw over the fence.’ Parker followed by ripping a 0-1 pitch over the wall for her sixth long ball of the year.

Parkside tallied two more runs in the second to take a 3-2 lead.

NKU got their first two batters on base from back-to-back singles.’ Farris drilled a three-run bomb to give the Norse a 5-3 lead.

The offensive surge continued into the fifth inning as seven runs crossed the plate for NKU.’ Junior catcher Sam Del Vecchio singled down the left field line to jump-start the rally.’ Freshman right fielder Ashley Gates was hit by a pitch and was awarded first base.’ With two runners on, Ehlers doubled to right to knock in a run.’ Lorenz singled to collect an RBI of her own.’ Senior second baseman Rose Broderick smacked a sac fly to record an RBI which extended NKU’s lead to 8-3.’ Farris roped an RBI double to left to add another run to the board.’ Parker slammed her second home run of the game to seal the win 12-3.’ Farris and Parker combined for eight RBI’s on the day.

Roy picked up her 12th win of the season, giving up three runs on seven hits.

The Norse scored two more runs in the fifth to reach an eight run lead after five innings.’ NKU defeated the Rangers 8-0.

Next, the Norse will take on Tiffin (20-18) in a non-conference double header at 3 p.m. on April 23 at The Paradiso Athletic Fields.