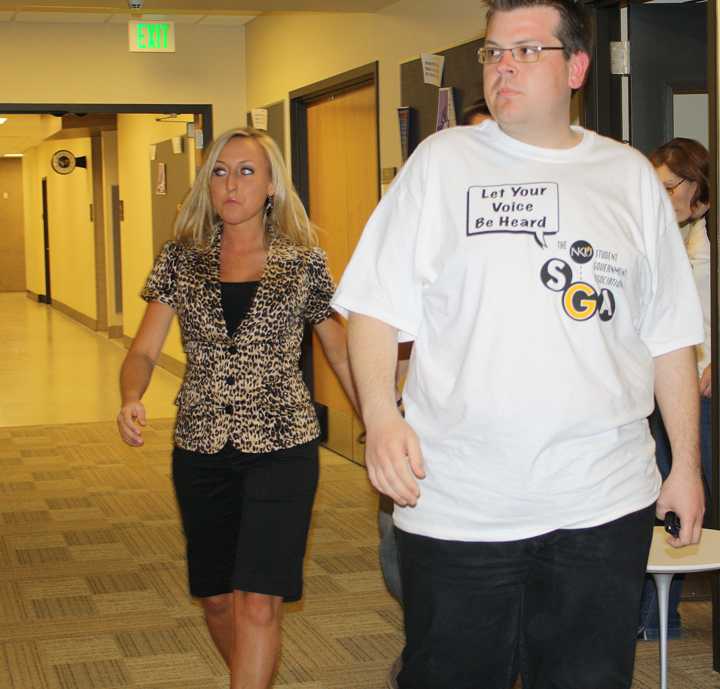 The Student Government’ Association Elections have been marred with accusations that the Presidential and Vice Presidential winners, K. Keith Kaseke and Dennis Chaney, conducted themselves in an unethical manner and violated the SGA election guidelines.

The accusations say that Kaseke, who is a Residential Assistant for Northern Kentucky University, used his time working the desk in Norse Commons to set up lap tops and then would stop students to get them to vote.

The accusations also state that Kaseke stood over these lap tops in Norse Commons and pressured students to vote for his ticket. Also included in the accusations was that during his shift in Norse Commons, Kaseke violated an election guideline stipulating that candidates cannot use their time as employees

A joint appeal filed by Kevin Reynolds, Gabe Cronon, Marilyn Henry and Leigha Phelps, all of whom were also running for the offices of president and vice president, accused Kaseke and Chaney of violating the students’ right to a private ballot because of Kaseke’s actions in Norse Commons.

Phelps told the SGA Judicial Council, which is where all accusations and questions were directed, that just one vote being upturned is unethical.

Cronon, in an over-the-phone interview from Washington, D.C., said that ethics are up to interpretation. He also stated that Dominique Williams, a student running for the SGA Senate, was pictured in handbills used by Kaseke and Chaney without permission from Williams.

Williams appeared with a witness testimonial to say that she felt she had given Kaseke and Chaney permission to use the picture.

The arguments against Chaney and Kaseke continued with Henry who said that seven to eight people approached her saying that they were pressured to vote by a man inside Norse Commons.

In witness testimonials, Michelle Lunn said that on Wednesday April 15 she went to Norse Commons for dinner and said that Kaseke stopped her and asked her if she had voted. She responded ‘no.’ Then, according to her, Kaseke continued to pressure her asking her, ‘Would you just vote now?’ She then decided to vote and he turned the lap top toward her.

‘I knew Kaseke couldn’t see the screen, but I felt incredibly uncomfortable,’ Lunn said in her testimonial.

‘ ‘The only time I would point at computers was when I was showing students where to go on NKU’s website,’ Kaseke said in the emergency meeting. ‘

In an effort to defend Kaseke and Chaney, multiple students spoke to the Judicial Council in witness testimonials saying they had not felt pressured. ‘

NKU student Ryan Jones said that he witnessed Kaseke and Chaney campaigning and didn’t see them doing anything wrong.

Students have until April 23 to file appeals.The results of the hearing and appeals will be determined April 24, pending decision from the SGA Judicial Council.