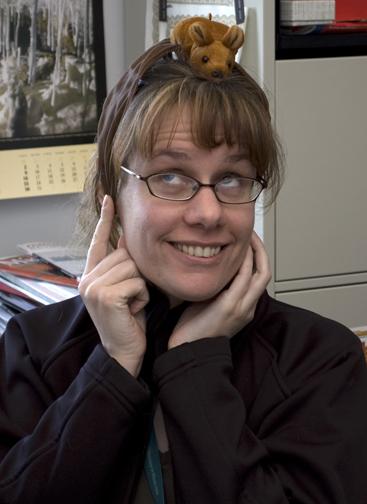 On the third floor of the New Science Center are the offices of Northern Kentucky University’sbiology professors. Tucked away in the corner of a narrow hallway is a crowded office. The cherry oak desk is too big. There’s barely room for the two offices or chairs for guests. Cave maps cover the wall above the chairs. Even’ stuffed animals fight for room on the desk. Live jellyfish sitting on the bookshelf looks scared, almost as if the microbiology books will shove its tank onto the floor.

None of it seems to bother the professor sitting behind the desk though. She points out that there’s a stalactite hanging from the ceiling abover her (not to be confused with stalagmites that come from the ground because they ‘might’ grow up).

‘It’s not real though,’ she says. The rock hanging straight above her came from the set of The Matrix.

Dr. Hazel Barton knows better than to touch any part of cave with bare hands. The oils in our hands alter the composition of the rock.

A hop, skip and’ jump away from her office is’ her lab – a two-room space to grow and examine microbes from caves. In the first room she pulls out a stack of petri dishes. Barton refers to what’s in them as ‘glowers’ – an organism that pulls iron out of caves in order to live.

Over in the second room she’s working on another project, this one with bats. The white noise syndrome is wiping out the species. Barton said that bats can eat 600 insects a day and pollinate the earth. With a potential increase in disease-carrying insects and a decrease in crops, it basically spells out disaster for people. She wants to save bats because it saves people, but there’s also the fact that she just likes them.

‘They’re really inquisitive,’ Barton said as she toyed with the charm on her necklace, a bat. ‘They’re so cute. They’re like little mice’hellip;They’ll check you out and look at you like, ‘what are you doing?”

Barton explained that she didn’t always research organisms in caves. Blending work and play was a problem in her book.

‘I always thought that you shouldn’t mix your science with your hobby because I thought it diluted your science, but it turns out to be quite wrong,’ she said. ‘You can bring part of your personality and what interests you in your science.

It wasn’t until she moved to the United States from England to pursue a Ph.D in medical microbiology that Barton considered marrying the two.

Ever since she’s been in cave microbiology, Barton has traveled the globe.Last year stayed in China for a month – a dirty but satisfying experience.

‘We [other scientists] were in a farmhouse. There was a pig in the toilet, there were chickens on the roof of the toilet and while you were peeing, you were peeing with a pig and chicken and you were pooping on the ground and that was one of the most personally rewarding things I’ve done in a long time,’ she laughs. ‘NKU allows me to do things that are not only recognized, but personally important to me.’

Barton seems content with the life she has. She leans back in her chair, almost hitting the bookshelf behind her. Looking around the cramped quarters, she beams and says she can’t ask for more.