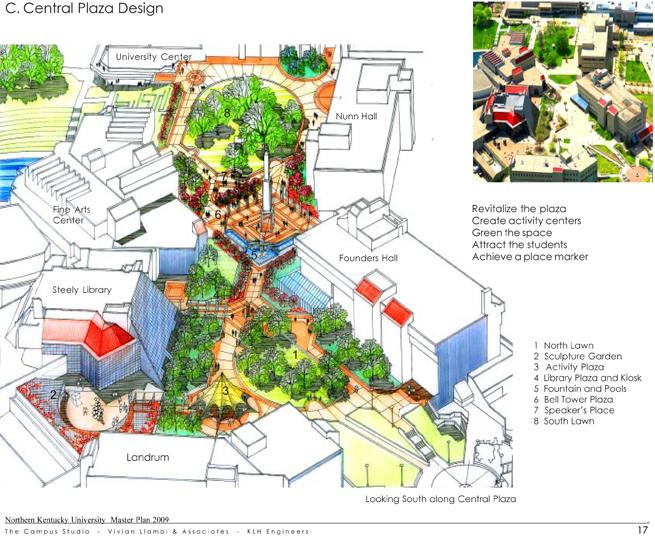 With over 400 acres of land, Northern Kentucky University is undoubtedly a hefty presence nestled in the middle of Highland Heights, Ky. As far as NKU is concerned, this hefty presence is due for a sizeable upgrade,’ and the upgrade is outlined in the newly published Master Plan 2009. ‘ Master Plan 2009: What is the master plan and why? ‘ The Master Plan 2009 is the university’s long range plan for proposed physical transformations to the campus. The plan encompasses the vision and goals of NKU for the next 20 years, laying particular emphasis on the growth of the student body and enhancement to the existing campus.’ ‘

According to a study recently completed for the university, NKU should double its current enrollment of about 15,000 students by 2020. Because of the results, the report recommends that the university add the appropriate facilities needed to support the projected growth-all of which is outlined in the master plan.’ ‘ ‘ What has been accomplished so far under the master plan? ‘ In 2008, NKU completed a major construction phase of the master plan with the completion of a number of buildings: The Bank of Kentucky Center ($60 million), the Student Union building ($37 million), and the refurbishing of the 150,000 square foot former nursing home for Callahan Hall. ‘ Future planning: ‘ Also outlined within this year’s plan are a number of new buildings and additional projects. NKU has slated funding for construction on the 112,000 square foot Center for Informatics building – which is currently under design’ and will be the main area that defines the campus’s new west quad.’ ‘

A new soccer stadium is also slated for construction and completion in 2009.’ ‘ Other priorities outlined within the plan include a major renovation of Founders Hall, the construction of the Health Innovations Center, and a new building for the Haile/US Bank College of Business – all slated for the 2010-2012 funding cycle. Money for the various projects within the plan will come from state and private donors, as well as federal grants. ‘ ‘ Long Term Strategy: ‘ The plan outlines a number of long term campus developments that are sculpted around the consideration of faculty, staff and students alike–but also put emphasis on the all around college experience–with regards to campus life and the surrounding community.’

This long term plan includes a number of areas and upgrades, which the plan considers vital to the campus. The areas of consideration are: buildings, open space, parking, pedestrian circulation, transportation and utility patterns. ‘ Concrete Jungle: ‘ The plan wants to create new neighborhoods or districts that will be identifiable as residential core areas or academic core areas, on campus.’ Also outlined is the utilization of green, open space in order to communicate the character and distinctiveness of the campus, and to foster a more park-like environment.’ ‘

The plan points out a revitalization program that will spread green foliage where the distinctive concrete jungle look of NKU once thrived. The plaza level side of Founders Hall will receive green space, as well as Steely Library (plaza level) and the area between Nunn Hall and University Center.’ ‘

Another feature that the plan proposes, in order to break up the concrete monotony on campus, is the addition of a bell tower and a water feature to the plaza area between University Center, Nunn Hall and the Fine Arts Building. Interconnecting walk-ways, conversational pockets and expanded foliage will also be added throughout campus, in order to promote a balance between landscape and buildings. ‘ Athletics: ‘ The plan also addresses the need to build and upgrade the university’s athletic space. The plan calls for the creation of three major athletic centers that include: a soccer and baseball stadium, a softball area and swimming facility-as well as new indoor and outdoor track and tennis courts. ‘