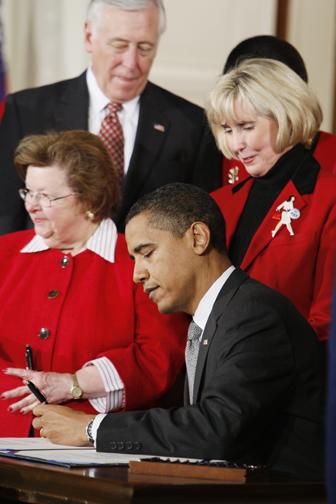 An Alabama grandmother, Lilly M. Ledbetter, got to dance with President Obama last week at the inauguration. This week, she headed back to Washington to witness the new president sign his first major piece of legislation a workplace-rights measure that became a reality due to Ledbetter’s own crusading efforts. Not bad for someone who toiled for years in the auto tire industry. But Lilly Ledbetter, 70, turned her personal experience of being paid less than her male Goodyear counterparts into a national reform that should assure more fairness on the job for all Americans. She sued Goodyear over being underpaid. She lost in the U.S. Supreme Court, but the case prompted congressional action to restore a key workers right. On Tuesday, Congress approved the Lilly Ledbetter Fair Pay Act. The legislation signed Thursday will make it possible for more employees to challenge unlawful pay discrimination based upon gender, race, age and disability. Congress acted to repair damage done by an egregious error on the part of the conservative majority on the high court in 2007. The court ruled 5-to-4 that, while Ledbetter had been the victim of pay discrimination, she’d failed to make her allegations within 180 days of the first act of discrimination. Justice Samuel Alito, writing for the majority, pointed to the 1964 Civil Rights Act for that bit of legal gymnastics. But a lower court had the right perspective when, earlier, it ordered that Ledbetter be paid more than $3 million in back pay and damages. The trouble with requiring a strict timetable for reporting pay discrimination is that it often takes employees years to detect wage disparities. Letting businesses duck responsibility for unlawful discrimination as long as they’re able to hide it makes absolutely no sense. Now, Congress has clarified the law by relaxing the statute of limitations when pay discrimination can be proved. The reform had to await the election of Obama, since former President George W. Bush had vowed to veto it. Congress has other good proposals pending that would further strengthen the laws against unfair pay rates for workers. For now, the Ledbetter bill may result in more pay-equity lawsuits from women, who tend to earn less than men for performing similar work. But the goal in coming years should be as the bill’s chief sponsor, Sen. Barbara A. Mikulski, D-Md., advises that businesses no longer discriminate.