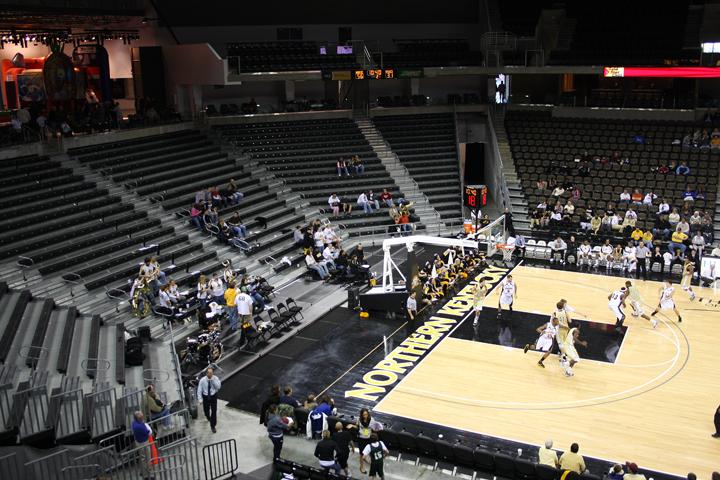 The new Bank of Kentucky Center boasts a seating capacity of 9,400, but the ability to fill these seats has not come as easily as anticipated.

The near-sellout crowd for the Nov. 8 match-up between Northern Kentucky University and the University of Louisville seemed like a positive precursor for this season’s men and women’s basketball games.

‘The crowd at the Louisville game was surreal, and a glimpse of what it could be like in the future,’ said Dave Bezold, men’s basketball head coach. ‘The students were amazing. To see the student section having so much fun at a game was great.’

The previous attendance record for a men’s or women’s basketball game at NKU was just shy of 2,000, but on that November night nearly 9,000 students, parents and alumni emerged to watch the first basketball games being played inside the BOKC.

Despite all that, thousands of seats remain empty come game time.

The Nov. 8 attendance numbers were nowhere near as close in the two games that followed, with just over 700 fans at each game.

‘The attendance so far is not good,’ said Kevin Reynolds, Student Government Association vice president of student involvement. ‘We’re excited for being able to have more people than we did in Regents . . . with this good of a team and amazing arena, there should be triple the amount (of fans) here.’

Granted, NKU men and women’s basketball haven’t played a Division I powerhouse like Louisville in those following games.

‘I would love to see the place filled all the time but that is not realistic,’ Bezold said. ‘The attendance will grow; it always does the second semester.’

Reynolds and fellow co-founder’ Andrew Stewart have attempted to revamp the Norse Force, NKU’s pep club, to help get the student section back on its feet.

‘We’re really happy to have the Norse Force in full effect, and our student section has been dubbed the Thunderzone ‘- those who don’t show up are really missing out,’ Reynolds said.

‘It’s pitiful; we expected more support regardless of how far into the season we are. The women’s team is the defending national champ and their attendance is even less than the men’s,’ Reynolds said.

The Campus Book and Supply store gave 300 Norse Force T-shirts to Reynold, but only 30 people are currently affiliated with the pep club.

‘I think one reason for the low attendance is (that) there isn’t enough PR for the games,’ said freshman communication major and Norse Force member Abbie Swan. ‘For the U of L game there was a banner hanging outside the SU informing the students of everything you needed to know; I haven’t seen anything like that for the games that followed.’