Deconstructing Mike Maydak and his ‘Year of Blood’ 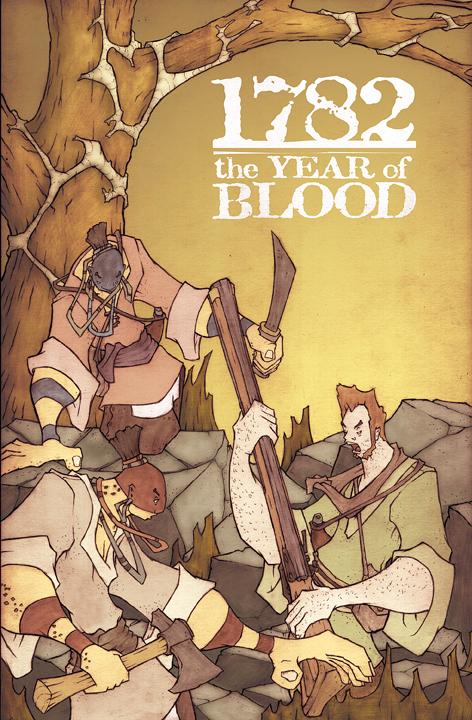 The first time I met Mike Maydak he asked me for a dime. ‘

He broke my dollar for some spare change and rushed out to his car to fill the parking meter.

But don’t let this quip confuse you – Maydak is by no means a starving artist. Since picking up a Bachelor of Fine Arts Degree in 2004, the Northern Kentucky University Alum has taken what he has learned to make a name for himself as a comic book artist.

Maydak reflected on his time at NKU and said, ‘Most of the faculty thought I was too focused.’ Thankfully, it was this focused mentality that helped Maydak tune out professors who played the role of buzz kill, because it was in his sophomore year that Maydak found his true calling. It’s in the ‘bone’

Maydak began his career at NKU as a journalism major.

‘I wrote a piece for one of my journalism classes and I made some parts of the story up,’ Maydak admitted. ‘The words ‘fatal error’ were written on my paper. I just thought, this is not for me if I can’t make stuff up.’ Maydak’s jump from scribe to illustrator was hardly something new for him.

‘I always had a knack for drawing,’ Maydak said. ‘I enjoy drawing and writing in a negative space in a picture.’ Maydak’s next move was supplying a weekly comic strip for The Northerner – a look into sociological issues through the eyes and ears of a monkey named ‘Slimbone.’

‘Slimbone was my alter-ego,’ Maydak said. Indeed, ‘Slimbone’ rides high on a sense of humor that isn’t far from his own – a blend of sarcasm and for lack of a better word, random.

You can see a bit of ‘Slimbone’ in Maydak, who will post MySpace statuses like, ‘Maydak hates everything popular’hellip;except Johnny Cash and Wolverine.’ His alter ego can be seen slamming ‘all things popular’ like McDonalds, which he criticizes for being a major contributor to people’s health problems.

Whether ‘Slimbone’ was made to serve as finger pointer or just a few frames of random humor – it worked. The comic strip was a big step for him into the comic foray-appearing regularly in The Northerner as well as being nationally wired.’

But when asked if the musings of an astute primate was a way to stand on his soap box and point out all the world’s problems, Maydak replied, ‘Honestly, the whole idea came from a monkey finger puppet an ex-girlfriend gave me.’

It’s in this statement where you can see how random fits into the equation. Where one may see the use of a monkey as some sort of way to depict man in the primal stages of evolution catapulted into modern times, Maydak sees a finger puppet. Deconstructing Maydak

Maydak is the most unpretentious artist I have ever met. He doesn’t force ideas on you and leaves his work open to interpretation. You can’t break his work down into separate parts to then understand the piece as a whole.

The most recent attempt to do so was made by fan-boy king- AintIt CoolNews.com’s Harry Knowles.

In his review of Maydak’s newest comic book, ‘1782: The Year of Blood’, Knowles wrote, ‘Maydak’s images may look like the stuff of Disney animation.’ Maydak replies, ‘If that’s what he sees that’s fine with me. I don’t see Disney but then again, everyone has been influenced by Disney.’ Even though he likes to discount all things popular on MySpace, Maydak has no qualms citing several pop culture influences (mostly out of Europe) from both the current and not-so-current zeitgeist.

‘Windsor McCay, Mitch Byrd, and European anime are all influences,” ‘ Maydak said. One piece of pop art that he is reluctant to say is a direct influence but more a piece of animation he related to, is the quasi-anime inspired TV show, ‘Venture Brothers.’

‘I love that show,’ Maydak exclaimed. ‘I love the pirates episode from season two. I love Brock Sampson. I like that he’s this unstoppable force that is sort of invincible but he’s really not.’ Maydak continued, quoting random lines, verbatim, from several episodes and then criticizing parts of season three for giving, ‘too much character background.’

‘They took away from the mystery of some of the characters,’ said Maydak. At the time, the digression into analyzing an ‘Adult Swim’ program seemed a moot point in the conversation -a chance to stretch my fingers, take a sip of coffee and indulge with him in some critiquing.’ But the divergence into all things ‘Venture Brothers’ further proved deconstructing Maydak an impossible task. He doesn’t completely go one way or another. He doesn’t discredit the idea that ‘Venture Brothers’ is an influence, but never fully submits that it is.

‘Initially you do art for yourself,’ Maydak admitted. ‘But eventually you realize you’re doing it for other people. It’s not up to me to tell you. Ultimately, it’s up to you to decide what a certain piece means.’

This is what makes Maydak all the more fun to deconstruct as an artist, because you really can’t.

Maydak can probably list all of his influences on two hands. He can cite multiple comic book series/artists, TV shows and even Cincinnati’s architecture as things he relates to.’ But in the end, as with any artist, what’s important is figuring out what Maydak’s style is.

‘I’m not interested in realistic’ Maydak said. ‘If you want realistic, take a picture.’ But you don’t need Maydak to tell you to figure that out. Look at any of his sketches or characters from ‘1782’ and you find out that he’s not trying to capture any kind of reality. On the cover, three characters dominate the page with massive forearms and hands. Even though not as much detail is given to their faces (one of them is looking down so that you can’t see him), they are still drawn to evoke something.

‘I like highly objectified bodies,’ Maydak said. ‘I like to push the envelope on expressions and body characteristics. Hands are cool. I think a personality is in the face and hands.’ This was a potential breakthrough into deconstructing Maydak as an artist-but not really.

After offering insight into why he draws the human body in such an highly objectified/stylized manner, Maydak added, ‘I don’t know anatomy. I work out a lot but I couldn’t tell you which muscle is what. I’m just applying shapes when I draw. If it looks right to me, I do it. I really have no clue.’

‘Perception is reality,’ said Maydak. This is a peculiar statement from an artist who isn’t interested in realism.

Maydak mentioned that one of the reasons he always connected with drawing and more specifically, comics is that he likes audience participation.

What one perceives Maydak’s work as is their reality. What another sees is that audience member’s reality. Art is not something that can be deconstructed. Its influences are far and wide but never specific.

This is as close as I’ll ever come to deconstructing Maydak the artist-and that’s the point. Monkeys, big forearms and beyond

At 27-years old and only four years removed from NKU, Maydak sure has accomplished a lot. He produced a successful comic strip that was nationally wired, does part-time work as a painter, is an instructor at Baker Hunt Community Art and Cultural Center, an adjunct professor at Cincinnati State and just released the first of eight chapters in his comic book series, ‘1782: The Year of Blood.’

‘Talent is how motivated you are,’ Maydak said. ‘It’s how disciplined and focused you are.’ Maydak served up a few words of inspiration for artists in training.

‘Take advantage of anything you can. And don’t smoke pot. Artists who smoke pot don’t do art – they smoke pot.’

You can see how random fits into the equation.