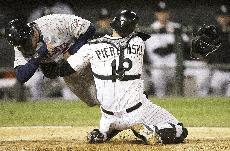 Thanks to Jim Thome’s bat and Ken Griffey Jr.’s arm, the AL Central has a winner at last: the Chicago White Sox.

John Danks pitched eight innings of two-hit ball, Thome homered and Griffey threw out a runner at the plate with a tough tag by A.J. Pierzynski, helping Chicago beat the Minnesota Twins 1-0 in a 163rd-game tiebreaker for the division title Sept. 30.

The White Sox joined the Cubs in the postseason, the first time since 1906 that both Chicago teams are in.

Next up for the South Siders, a first-round matchup with the surprising Rays. Game 1 is Oct. 2 at Tampa Bay.

The White Sox got a huge boost Tuesday from two of their oldest players: Thome and Griffey, both longing for their first World Series championship.

Thome’s long drive on a 2-2 pitch from rookie Nick Blackburn cleared two rows of shrubs in center field, traveling an estimated 461 feet to snap a scoreless tie in the seventh. It was the 541st homer for Thome, who raised his right fist as he rounded first base. He hadn’t been to the playoffs since 2001.

Griffey, who came to the White Sox in a trade with the Reds so he could have a chance at playing in the postseason, cut down Michael Cuddyer with a nice throw in the fifth. Griffey, who like Thome, is 38, will be making his first postseason appearance since 1997 with Seattle.

Danks, pitching on three days’ rest for his first time and with just one win in his previous seven starts, held the Twins hitless through the first four innings until Cuddyer led off the fifth with a double and moved to third on Delmon Young’s fly to center.

When Brendan Harris hit a fly to Griffey in shallow center, Cuddyer took off for the plate. He crashed into Pierzynski, who held onto the two-hop throw from Griffey while tagging Cuddyer for the out. Pierzynski then popped up and showed the ball as the crowd of 40,354 – mostly dressed in black – roared.

The White Sox hosted the game because they won a coin flip earlier this month and what an advantage it was: Chicago went 8-2 against the Twins at U.S. Cellular Field this season and 1-8 at the Metrodome.

It was the eighth one-game playoff in major league history and the first in the AL since 1995 when Seattle beat the California Angels 9-1 to win the AL West. Playing for the Mariners in that game was Griffey and Chicago bench coach Joey Cora.

A late-season slide by the White Sox began at the Metrodome a week ago. The White Sox entered a three-game series with a 2 1?2-game lead in the division but the Twins pulled off a sweep to take over first place.

Chicago came home and lost two more to the Indians but was able to stay close because the Twins dropped two in a row to the Royals at the Metrodome. On Sunday both teams won, leaving Minnesota’s lead at a half-game. The White Sox had to beat Detroit in a rain-delayed makeup game Sept. 29 to force the Sept. 30 tiebreaker.