Students get to learn Red Sox 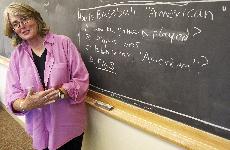 Baseball and American Culture,” Sept. 24, at Bates College in Lewiston, Maine. The course takes a big-picture look at Major League Baseball and its place in American history and culture.

Landing a seat in Margaret Creighton’s “Red Sox Nation” course at Bates College is nearly as difficult as scoring a playoff ticket at Fenway Park.

With only 15 openings, it took only a minute or so for the class to fill up when online registration opened. For their efforts, the students spend three hours one day a week talking baseball.

“People are jealous of us,” said Hope Staneski, a first-year student from Milford, Conn.

Creighton, a history professor, came up with the idea for “Red Sox Nation: Baseball and American Culture” following the Boston’s heartbreaking loss to the New York Yankees in the 2003 American League championship series.

The course was first offered at the small liberal arts college in 2005, a year after the Red Sox broke the Curse of the Bambino by winning the World Series. This year’s class, the second time it has been offered, is open only to freshmen, who get full academic credit toward graduation.

The course title refers to Boston’s zealous fan base, of course, but it isn’t just about the Red Sox. Instead, it takes a big-picture look at major league baseball and its place in American history and culture.

Students are asked to explore baseball’s ties to politics, religion, race, gender and class. They examine what fans eat at games, why umpires dress like they do and how rivalries – does the Yankees-Red Sox bad blood sound familiar? – have helped shape regional identities.

“I’m not a baseball geek,” Creighton said. “Students are way over my head in regards to statistics and franchises, but I bring a level of enthusiasm and a way to encourage them to look beyond the obvious.”

The discussion ranged from Dustin Pedroia and Miguel Tejada to how the messages of presidential candidates Barack Obama and John McCain emphasize the same core values that baseball epitomizes. One student compared the Tampa Bay Rays’ unexpected rise in the league standings this year to Obama’s presidential candidacy.

Students debated whether football and NASCAR have supplanted baseball as America’s favorite pastime. They recounted their personal recollections of games attended and teams cheered on while growing up.

They discussed the class differences between fans with expensive seats behind the dugouts and those who sit in the cheaper bleacher seats.

They questioned whether Manny Ramirez represents the American dream, with his reputation as a slacker who at times seems to put himself above his team.

Baseball essentially mirrors American society, Creighton said. Nowadays, for instance, it could be said it reflects U.S. immigration trends with the influx of players from Latin America.

“Baseball, it could be argued, has helped facilitate positive ideas about immigration,” she told the class.

Bates isn’t the only school that’s had baseball courses. Tufts University in Medford, Mass., has had courses on the mathematical analysis of baseball. The University of Southern Maine has a course that includes a weeklong road trip to the Hall of Fame and to ballparks at all levels from Class A to the major leagues.

But Creighton’s course may well be the only one with the Red Sox name in its title.

A native of western New York, Creighton had a fondness for the Yankees when growing up. But after decades in New England, she counts herself a Red Sox fan.

So do most of the students in the class, including Will Furbush, a freshman from South Portland, Maine. But he’s glad the class is more than just baseball statistics and Red Sox.

“I’ve learned about the history and culture of baseball and how it interacts with American society,” he said.

For Eliav Levy of Springfield, N.J., it’s not easy being the only Yankees fan in the class. “It’s pretty intimidating,” he said.