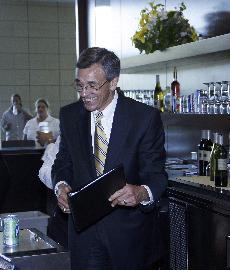 With the Bank of Kentucky Center opening its doors this week, students and the public will see something different on campus – the ability to purchase alcohol.

Northern Kentucky University allows alcohol at official University functions, and approved non-university functions in the President’s home, the Alumni-Reception Center, and other non-public areas on the campus as designated by the president, according to NKU’s administrative regulations on it’s Web site.

This marks the first the time that a public area is allowed to serve alcohol on campus to the general public.

In February 2008, NKU President James Votruba requested a waiver from the Great Lakes Valley Conference to serve alcohol at the new arena. In the letter sent to Jim Naumovich, commissioner of the GLVC states, “NKU is requesting permission to sell alcohol to the public for all of its home basketball games (estimated to be 18 to 20 playing dates annually) and to be given permission to provide alcohol in all the private areas including suites, party suites, party decks and hospitality areas.”

Votruba said he wanted to have the ability to serve alcohol at the arena because “this facility must cover its operating expenses and eventually, generate net revenue for NKU.”

“I think the business model requires it for a facility like this,” Votruba said. “The University of Cincinnati and Xavier University serves alcohol in a controlled environment.”

The revenue accrued at the arena will go back to NKU, according to athletic director Jane Meier.

“It is all coming back to Northern,” she said. “None of the concession revenue will go back to NKU Athletics. The revenue that is generated goes to building financials, but it all goes back NKU.”

SMG, the arena firm that NKU hired to run the facility influenced the decision by Votruba to go for this waiver. SMG assured Votruba that it would card everyone and make sure that no one is over served.

“SMG did help in the decision because this place does need a financial model that allows it to break even,” he said. “In most of these facilities to break even, there has to be this controlled environment to make the selling of alcohol available.”

Votruba said he will look closely at the availability of alcohol to be served on campus.

“We (NKU) are going to have to monitor this very carefully,” he said. “My sense is, that NKU as a campus does not have the kind of alcohol problems that other residential campuses have. I don’t think I am na’ve about it. I have asked a lot of people about this situation. I hope they (students) don’t base their decision on coming here on alcohol. I hope the students come for other reasons.”

This is not a permanent decision by the conference or NKU. In the response letter from Naumovich in June 2008 he states, “Please be advised that the Council of Presidents has approved the NKU waiver request to sell and provide alcohol at The Bank of Kentucky Center on a two-year conditional basis.”

“If this contributes negatively to the climate of this campus, I advised that the Council of Presidents has approved the NKU waiver request to sell and provide alcohol at The Bank of Kentucky Center on a two-year conditional basis.”

“If this contributes negatively to the climate of this campus, I don’t care what the financial plan says, we won’t do it,” Votruba said.

After the two-year deal Votruba and NKU will review the decision and decide whether to proceed.

“We will do an assessment after two years and decide if this is working,” he said. “I am not against students drinking. I am, however, against underage students drinking and I am against being over served. That puts not only the person in danger, that puts everyone in danger.”

When the basketball season begins in November with the exhibition game against the University of Louisville, it will mark the first time in NKU basketball history that alcohol will be served at an event. However, it will not be the first sport at NKU where alcohol is served.

Those who attend soccer games at the Town ‘ Country Sports Complex in Wilder or baseball games at Champion Window Field in Florence have been able to purchase alcohol at those venues.

“The GLVC permits alcohol if it is operating procedure,” Meier siad.

According to the alcohol policy in the GLVC Handbook, “Competition at off-campus sites where alcohol is normally sold may be used for conference competition if so approved by the conference commissioner.”

With the doors opened and Carrie Underwood performing Sept. 24, Votruba’s main hope is for the facility to be full.

“My hope is that students will pack this place and the community as well,” he said. “It just looks like a place to take a date or go with a group of people. I guess alcohol would be a part of that, but we will monitor this.”