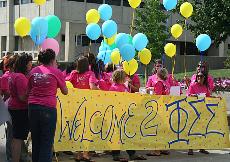 The increase in sorority recruitment numbers this semester was overshadowed by the rising dropout rates of Greek Life before completing the process.

Joy Feictner, president of the Panhellenic Council on Northern Kentucky University’s campus, said there were several reasons why women chose not to join. Some new recruits had family or other obligations that prevented them from completing recruitment. Others, however, decided to drop after finding out which sorority had accepted them.

“Unfortunately, we did see an increase in the number of women who did not get their first choice and chose to drop,” Feictner said. She estimated that between 10 and 15 women dropped because of this reason.

There were 200 women who registered for recruitment, 165 who attended all of the meetings and 134 who actually accepted bids into a sorority.

When a potential new member goes through recruitment, she must attend all of the meetings. Recruitment lasts through a four-day period. On the first day, new recruits meet with each of the sororities for 45 minutes and just ask questions about the sorority. “It’s basically like a meet and greet,” Feictner said.

On the second day, the new recruit picks the top three sororities she is still interested in and meets with each one to discuss the group’s philanthropy projects.

On the third day, she will narrow her top sororities down to two and talk to its members to find out why they have chosen their sorority and what the experience has been like for them.

Each night after these meetings, both the existing Greek members and their new recruits meet in Otto Budig Theater to rank each other. A computer program tracks the rankings by taking the recruits’ sorority ranking and comparing it to the ranking each sorority gives new recruits.

Feictner explained that if both the new recruit and the sorority rank each other as their top choice, the recruit gets into the sorority she wants.

But if not, the recruit is left to either choose to join another sorority or drop Greek Life until the next recruitment session.

Feictner said that recruits who decide to drop are eligible to come out for recruitment in the following semester, however if they signed a bid in the process, they are barred from entering any other sorority for one calendar year.

She explained that a bid is a legal, binding contract that new recruits sign on the third day of recruitment and the different sororities make sure new recruits know the gravity of the bid they are signing.

As for the sororities who had members drop, they were able to replace the lost recruits, up to 30 new members.