Schools for Schools fights for kids 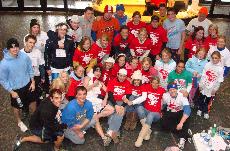 Katie Ritter just couldn’t stop herself. She was only there to support her friend, but ended up giving in to temptation.

“I had to help. These kids really don’t have a voice,” Ritter admitted. “I just kept thinking about how it all goes to them.”

Ritter, a sophomore and social studies secondary education major at Northern Kentucky University, is the President of the philanthropy organization Schools for Schools.

The national non-profit organization, was created in reaction to the 2006 film Invisible Children, which is about those who have been dumped into displacement camps by the Ugandan government. It’s a way to protect them from the Lord’s Resistance Army (LRA), an anti-government guerilla force that began abducting children and turning them into soldiers for the war against the government.

Mysteriously, the Ugandan government has been ignoring the camps and leaving the impoverished to live in a center of disease and poverty.

According to www.invisiblechildren.com, with the war still in effect, many people, especially children, are left displaced and are hesitant to return home without the security of knowing they will not be uprooted again.

Schools for Schools helps kids in the displacement camps receive an education.

“It gives them something to live for,” Ritter said.

When she joined the organization last October, Ritter became the fund raising chair and helped raised almost $4,000. “The money went towards books, teacher housing and water sanitation for the Lacor School in Northern Uganda,” Ritter said.

Lacor is one of the 10 schools that the national organization helps fund. Ritter’s focus as President this year is to raise money and flourish as an organization while doing so.

“We’re so small right now,” Ritter said. ” We need to grow and raise more awareness. We want people to know about the organization and the cause.”

Leigha Phelps, a sophomore and political science major at NKU is fundraising chair for Schools for Schools.

“Our goal this year is raise $5,000,” stated Phelps. Phelps is getting the ball rolling by orchestrating several events this year including one at the Coldstone Creamery in Crestview Hills, which is tentatively taking place at the end of this month.

“We will also be having an Ornaments for Africa Fundraiser in December. People can buy Christmas ornaments and all the proceeds go to funding for the kids schools,” Ritter said.

Fundraising, recruiting and advertising are all ways Ritter, Phelps and the other 20 or so members plan to make their cause better known.

“The buzz is going around,” Former President and Founder of the NKU branch of Schools for Schools Kelly Sirk said. “The people in the organization are the most dedicated I know. They’re passionate and have a done a lot so far. Especially considering how hard it is to start an organization from scratch.”

Sirk graduated from NKU last May with a degree in Public Relations. Even though her days at NKU are over, Sirk remains a big advocate of the cause and serves as what she calls an “unofficial adviser” to the organization.

“It was the single greatest collegiate experience I had at NKU,” Sirk admitted. “It’s about helping people who don’t have the means to help themselves.”