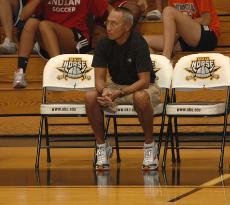 The Northern Kentucky University volleyball team is looking toward having another incredible season and that is because of its head coach Carlos Chia.

Chia is in his eighth season as the head volleyball coach for the Norse. Before coming to Northern, he was the head coach at Thomas Moore College from 1988-90, coached the Junior Olympic volleyball team for five years and was head coach at Mount Notre Dame High School in Cincinnati where he led his team to a district championship in 1991.

Chia has had much success during his years as head coach. In 2001, NKU had a perfect season going 14-0 and also Coach Chia was names GLVC Coach of the Year.

In 2002 the Norse had a record of 22-10 with a second place finish in the GLVC Tournament. 2003 was an even bigger year for the women and Chia as their record grew to 26-12 overall in four years.

In 2004 and 2005 NKU posted an all together record of 48-16 and made an appearance in the GLVC Tournament both years and advanced to the semi-finals both times. Chia was also named GLVC Coach of the Year for the second time in 2004.

Last year in 2007, Chia lead his team to a 26-9 record and earned a berth in the NCAA Division II Tournament. NKU also kept its winning streak going as they had their 15th consecutive 20-win season.

“I feel that they will play their game this year.” Chia said “It’s up to them. Practice, practice, practice makes perfect. Every year we recruit with one purpose only. I have very good fortunes and believe that hard work pays off. If you work hard in the classroom and on the court, the rewards will come easy.”

Everyone is expecting great things from the team this year, and Coach Chia is sure to give us one. With tough competition, Chia will surely bring his team out strong in the end.