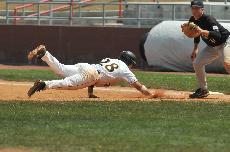 The Northern Kentucky University baseball team (28-20, 18-9 in the Great Lakes Valley Conference) won three of four games against Wisconsin-Parkside (4-34, 1-26 in the GLVC) over the weekend.

In Game 1, the Norse quickly established a lead in the first inning when a sacrifice fly hit by sophomore Evan McDole allowed Jon Back, who hit a double earlier in the inning, to score.

NKU extended their lead in the fourth inning when Kevin Dusold homered to left center, Larry Pempek hit a double to drive in Jeff Bohlen, who singled to reach base, and Aaron Mentz hit a two-run homer, scoring Pempek and ending the inning with a 5-0 lead.

The Norse added their final two points in the sixth inning.

Freshman left-hander Dave Middendorf (5-0) pitched all nine innings for the Norse, limiting the Rangers to four hits and striking out five to gain the win in the shutout game.

In Game 2, the Norse rallied for three runs in the fourth inning to overcome a 4-2 deficit.

Dusold reached base on a single to begin the inning for the Norse, and the next batter, McDole, reached on a walk. A sacrifice bunt laid down by Mentz advanced both Dusold and McDole. Jack Ambrose grounded out to second but allowed Dusold to score, and Bohlen drove in McDole with a double hit to left-center.

Dusold batted in two runs for the Norse in the fifth inning as he hit a double to drive in Back and Jake Shaffer, and in the sixth inning, Shaffer added the Norse’s final three runs with a three-run homer hit to right center.

Kevin Jordan (2-0) closed the game for NKU and acquired the win, allowing one run on two hits in four innings.

On April 27, senior day for NKU, the Norse met the Rangers for another double header.

The Norse gained a split of the senior day double header, winning Game 1 with a score of 3-2 and later dropping a 4-3 decision in Game 2.

Game 1 on April 27 began much like the April 26 Game 1 for the Norse as they established another one-point lead in the first inning on a single hit by Dusold that drove in Shaffer, who reached base on a walk.

The Rangers scored a run in the second inning to tie the game.

NKU broke the tie in the fourth inning as the Norse scored two runs, one of which was scored when Bohlen stole home.

Wisconsin-Parkside scored its final run in the sixth inning.

The senior day victory was capped off with a game-ending double play involving senior shortstop Back and senior first baseman Drew Rushing.

In Game 2, NKU was defeated by Wisconsin-Parkside, who scored all four runs in the second inning off NKU starting pitcher, Cameron Betourne (0-3), who surrendered four runs on four hits.

The Norse put up two in the fourth inning and one in the fifth but were unable to mount a comeback, splitting the April 27 double header with the Rangers.

Todd Lorenz (1-7) pitched all nine innings for Wisconsin-Parkside to lead the Rangers to their first GLVC victory. Lorenz allowed three runs on eight hits, walked two and struck out four for the win.

The Norse will host Southern Indiana on April 30 at 2 p.m. at Champion Window Field and will conclude their season on the road against Saint Joseph’s in Rensselaer, Ind.