Editors give their goodbyes 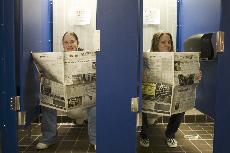 The last two years have been the hardest two years of my life – and definitely the best. After passing out on and demolishing a plant, dancing with a gay man dressed as Captain America, watching Joe throw-up outside a cab and singing Karaoke with Art, this staff has become my friends and my family.

My love for the news cemented itself after I took newswriting II, feature writing and practicum in the same semester. Although I seriously considered overdosing on pain pills, surviving that semester helped me to grasp what it would take to be a journalist.

First and foremost, I would like to thank Katie Walker. Before the NRTL issues, I was all set to be Katie’s assistant editor. Were it not for her, I would not be where I am today. Although it was a little stressful to be thrown into the position after she resigned, it was an awesome experience.

When I started at The Northerner in the fall of 2006, I was joined by my now “wifey,” Regan Coomer. Regan and I were an unexpected and awesome team. Together we helped the section grow and thrive. She has always been there for me, whether it was to help write a catchy headline or baby-sit me on the side of the road in St. Louis. Thanks wifey.

I would also like to thank my student media, capstone and life advisor, Gayle Brown. Gayle’s blunt seriousness and hovering parent instincts took a long time to get used, but she always has good intentions. Thanks for the candy bars, pens, criticism and support.

After a semester of holding down the features section on my own, Joe Szydlowski and I were promoted to co-editor in chiefs. I wasn’t sure how it would work with our competitive personalities, but it has been nothing but a joy. Thanks for pacing the hallways with me while you were slightly inebriated to help me find my stuffed bear at the hotel. Oh, and for being my co-editor and all that.

Before I walk the walk and head out into the real world, there are just a few things I need to get off my chest.

First of all, The Northerner is run by students. BY STUDENTS. We are not perfect, though some of us would like to think we are, and we will always make mistakes. Next time you see an error in a headline or a story, feel free to redline it and drop it by UC 203. Or better yet, join the staff and help us fix it.

I’m sorry, but I have to complain about one more thing.

There more than 125 student groups on campus and only 28 issues of The Northerner each year. We’re sorry if we can’t cover all your events. Trust me, as the former features editor, I would love to pack the entire paper with student organizations, events and photos, but it’s just not feasible. On a related note, if your group doesn’t send a press release or at least an e-mail about the event, don’t be angry if we’re not there. We try to have a grip on this campus, but we aren’t mind readers.

So, I would like to end by saying that I love this publication, the people who work for it and the people who dedicate an hour each week to reading it. I have eaten, drank and slept The Northerner for two years and now it’s time to move on. Although I’m sure I will miss it eventually, I definitely won’t be missing it next Tuesday night.

I was going to quit this paper. I really was.

My first week as photo editor was full of challenges, mistakes, worries and late nights. I sat quietly in my chair my first Tuesday night randomly clicking on things on my computer screen while Amy, Regan, Kellie, Matt and Lori walked into the “shunned” room where my work station was handed me scraps of paper and brightly colored post-its with numbers scrawled across them. I had no idea what to do with them or what to make of these new people.

I got through that first week somehow and stuck around for the second.

Each week after that my job became easier and more fun, though I was isolated on Tuesday nights in the “shunned” room.

Fall semester moved forward and I stayed busy with my classes and doing tons of photo assignments for the paper. During the staff trip to Washington D.C. in October I shared a room with Cassie, the assistant news editor, and we bonded over “Walker: Texas Ranger” episodes and 5 a.m. death-cab rides. Oh, yeah and the cabbie that rolled his eyes at us. I have one thing to say to him, I remember your face sir.

After that trip the staff turned into more than just my co-workers and peers, they became my friends. Good friends.

Winter break came and went, the office transitioned with two of our most integral members graduating.

When our first issue of the new semester rolled around I found myself no longer the lonely room 4 reject. Next to me sat Amanda, the web editor, and in the corner Jesse, a staff writer. Cassie floated in and out interjecting her own comments and stories as Jesse, Amanda, and I became a trio of awesome. We traded jokes and stories, each of us taking a turn as the D.J. and re-enacting Associated Press stories we found funny.

Tuesday nights have become something more than just deadline night, I look forward to the crazy plans we dream up (tunnels, anyone?), the songs we sing ( yes, my milkshake does bring all the boys to the yard) and all the food (cake, chinese, arby’s, sandwiches and lots and lots of caffeine).

There has been a time or two when we’ve been “too loud,” but hey when you’ve been in one room for more than eight hours watching YouTube randomness and researching the maze of tunnels that wind their way around NKU, you would get loud too.

As I look back on my first week at The Northerner I can’t fathom why I wanted to quit.

Now comes the part where I thank everybody. My mom and dad for making me go to school and supporting me the entire way through and buying me more than a few tires. My sisters for making me laugh when I wanted to cry and especially all of my professors. Each one of you shaped the way I view the world today and there isn’t a word to describe how thankful I am for you or how awesome you are. And Gayle, thanks for guiding me, putting up with my tangents and barrage of flair.

After this semester, my friends have turned into family. I will miss you all.

Three more things before I go though.

1.) If you want something to change, get up and change it. Don’t sit around and complain or criticize others when they try.

2.) I can ride my bike with no handlebars.