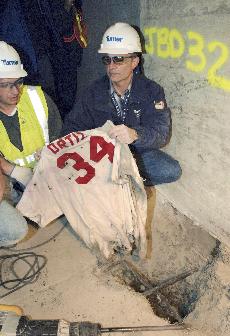 A construction worker’s bid to curse the New York Yankees by planting a Boston Red Sox jersey in their new stadium was foiled April 13, when the home team removed the offending shirt from its burial spot.

After locating the shirt in a service corridor behind what will be a restaurant in the new Yankee Stadium, construction workers jackhammered through the concrete Sunday and pulled it out.

The team said it learned that a Sox-rooting construction worker had buried a shirt in the new Bronx stadium, which will open next year across the street from the current ballpark, from a report in the New York Post on Friday.

Yankees President Randy Levine said team officials at first considered leaving the shirt where it was.

“The first thought was, you know, it’s never a good thing to be buried in cement when you’re in New York,” Levine said. “But then we decided, why reward somebody who had really bad motives and was trying to do a really bad thing?”

On Saturday, construction workers who remembered the employee, Gino Castignoli, phoned in tips about the shirt’s location.

“We had anonymous people come tell us where it was, and we were able to find it,” said Frank Gramarossa, a project executive with Turner Construction, the general contractor on the site.

It took about five hours of drilling Saturday to locate the shirt under two feet of concrete, he said.

On April 13, Levine and Yankees CEO Lonn Trost watched as Gramarossa and foreman Rich Corrado finished the job and pulled the shirt from the rubble.

In shreds from the jackhammers, the shirt still bore the letters “Red Sox” on the front. It was a David Ortiz jersey, No. 34.

Trost said the Yankees had discussed possible criminal charges against Castignoli with the district attorney’s office.

“We will take appropriate action since fortunately we do know the name of the individual,” he said.

A woman who answered the phone at Castignoli’s home in the Bronx on Sunday said he was not there.

A spokesman for Bronx District Attorney Robert Johnson said he did not know whether any criminal charges might apply.

Levine said the shirt would be cleaned up and sent to the Jimmy Fund, a charity affiliated with Boston’s Dana-Farber Cancer Institute. Along with that, New York will send a Yankees Universe T-shirt, which is sold to benefit Memorial Sloan-Kettering Cancer Center.

“Hopefully the Jimmy Fund will auction it off and we’ll take the act that was a very, very bad act and turn it into something beautiful,” he said.