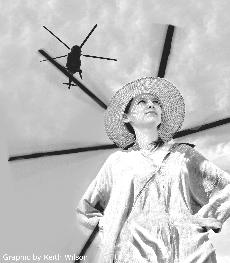 After spending their entire lives under their parents’ rule and having to do everything, or most everything, they ask of them, students are often overjoyed with the freedom that college brings. But some students still find their parents taking part in their everyday affairs.

These hovering tendencies by so-called helicopter parents have been increasing across the country, according to a recent study by marketing and information services company Education Dynamics.

Helicopter parents are parents who “hover” over their sons or daughters and watch their every moves. These tendencies can get especially bad when the kids go off to college. And to make matters worse, hovering increases as the semester goes on and finals roll around, Education Dynamics reported.

“We see a dramatic increase in helicopter parent activity at the onset of the second semester because parents are feeling hopeless, distraught, worried and frustrated stemming from an apparent loss of control,” said Dr. Chrissy Coley, a former assistant vice provost for student success initiatives at the University of South Carolina in a press release.

“Financial aid is hanging in the balance, first semester tuition seems like an apparent waste of money or the likelihood of a drop in grades is in the forefront of parent’s minds, and these parents do not know how to constructively manage their frustrations,” Coley said.

“I can understand why a parent would think, ‘I’m just doing what I think is right for my son or daughter.’ The problem is, they’re doing exactly what’s wrong for their son or daughter,” Johnson said in an ABC news article on helicopter moms.

“In taking over, they are sending a profound message: You are not capable of handling your life,” Johnson said.

Helicopter parents are a problem at Northern Kentucky University as well, according to Peg Adams, Interim director at the Office of First-Year Programs.

“I don’t know about it being a big problem, but I know that the millennial generation tend to have parents who are more involved in their lives and (who) wish to intervene,” Adams said. “I have, on occasion, received emails and/or phone calls from parents asking about their son/daughter’s progress or grades. Of course, I am not at liberty to discuss with them.”

Adams believes that parents just want to help, but they should allow their sons and daughters to handle their problems on their own. By doing this, parents take a step toward letting go and their kids begin to gain confidence in handling their own affairs.

Junior marketing major Matt Clifford does think that parents have some rights in their son’s and daughter’s affairs, but agrees that students should be allowed to handle their own problems.

“There is a line that must be drawn when it comes to how much the parent can demand, simply because once students are in college, they are generally legal adults, and need to be allowed to do their own thing, and become true adults,” Clifford said.

But it is important that students break down communication barriers and open up to their parents, Adams said.

“I think that if students talk with their parents about what is going on in their lives and how they are handling challenges, that does much to help parents let go,” she said. “In addition to support/guidance from the parents, students need to find a mentor on campus, a trusted advisor, faculty or staff member, older student/TA who can share important information about how to handle difficulties.”

NKU students are encouraged to speak with a mentor or counselor if they have problems so that they can learn to handle them themselves.

“For some students, it is simply easier to continue to let mom and dad take care of things (but) they need to learn how to self-advocate, and use resources available to them,” Adams said.

In the end, it is important for a student to respect the involvement that their parents wish to take with their education while learning to handle their own problems.

“Making the transition to college is difficult for both parents and young adults. Parents want to know their children are doing fine and students want to do some things on their own. Keeping the lines of communication open is important, and students need to show their parents that they are developing the skills they need to take care of themselves,” Adams said.