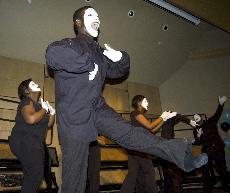 Loud, energetic and passionate praises to God exploded out of the Otto Budig Theatre April 12, as the Anointed Voice Ministries held its spring concert, entitled “I Shall Live.”

The Anointed Voices Gospel Choir was started at Northern Kentucky University in the mid-1980s and is a non-profit student organization “dedicated to uplifting the name of Jesus through song and praise.”

When the concert began, audience members were greeted with gospel music broadcasting over two large speakers placed at both sides of the stage as everyone found their seats.

TuNice Masden was the mistress of ceremonies and assisted all the different performances transition smoothly throughout the evening.

The performance started off with prayer and song, then the choir squeezed on stage and began to astound the audience with their powerful and soulful voices.

“We are here to touch lives and praise God,” Masden said.

The choir got so emotional while singing the lyrics in their songs that nearly half of them broke out in tears as they declared their love for God and shared their talents and praises with friends, family and strangers.

The choir wasn’t the only group that performed during the concert. The Praise Dance Team dressed in purple tops and long, flowing white skirts, following the choirs first couple songs. Their movements were just as powerful and touching as the songs. The step team, known as the AV Souldierz and the AV Mime Ministry team called A Greater Praise Mime Ministry, also entertained the audience and worshiped God in a unique fashion.

The AV Souldierz put on a military-like performance as an obedient boot camp for God. It was like “How She Move” meets church.

“We step for the glory of God,” Keith Justice, a step team member, said.

The final act and newest ministry in AV to perform was the mimes, known as A Greater Praise Mime Ministry. The overly theatrical performers used silence and movement and had the audience on their feet cheering the entire time.

With all of the focus on Brother Rick last week and his talk of obedient wives in the kitchen and the evil of the Beatles, the Anointed Voices Ministries concert was a different perspective on religion.

One of the songs sung by the choir summed up the message that was presented throughout the night, “I can call on him in the morning and in the middle of the night, Jesus will take care of me.”

Anyone interested can join the Anointed Voices Gospel Choir by attending rehearsals every Wednesday at 8 p.m in the University Center, suite 11.