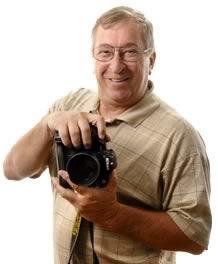 Office of Marketing and Communications

You may have seen him peek into your classroom, spotted him at a basketball game or seen him walking around campus. With khaki pants, a buttoned shirt and a pair of tennis shoes on, he tries to look like a student or pass as a faculty member. But with two cameras and a camera bag slung over his shoulder, it’s not an easy thing to do. His name is Joe Ruh, and he’s the campus photographer.

Ruh, the senior photographer at Northern Kentucky University, has been with the university since Oct. 1, 1977.

He considers his greatest accomplishment working at NKU for more than 30 years and is planning to retire at the end of this semester.

He came to here after quitting a full-time position as a photographer at the Kentucky Post. After seven years at the paper, Ruh tried freelancing, but then the current NKU photographer at the time gave him a call and said that he wanted to work for the Post. A week later the two switched places.

Ruh’s time at the paper made him the competitive photographer that he is. Every week he would compete with the other photographers to get on the front page. Here at NKU, he competes against time to photograph all that need be and against himself to continue to become a better photographer.

When Chris Cole, the director of media relations and communication for NKU, first met Ruh, he said, “It was kind of scary.” Which is what a lot of people find when they first meet him.

However, “There are two different Joes,” Cole said.

One can come off as scary, intimidating and gruff, but the other Joe emerges after a time.

“The more you get to know him, you learn it’s 100 percent bark and no bite,” Cole said.

He knows the Joe that’s always joking and trying to have a good time. “He is kind of like that cool uncle that you have,” Cole said.

“I think sometimes, I’m like my dad. I go after what I want,” Ruh said. “I can change and go from one end to the other, be just the sweetest little guy you ever met in your life, but when I want that photograph, I’m going for it.”

Ruh remembers the time, as a news photographer, that he was sent to photograph President Jimmy Carter getting off an airplane. He and fellow journalists and photographers were watching from afar, behind a rope keeping them from advancing on the runway. Then Ruh saw something that got under his skin: a photographer out on the runway, directly beside the plane. Ruh questioned the other photographers, “Why in the hell is he out there and we’re standing back here?” Someone replied, “What you going to do about it Joe?” Ruh was determined to get the best shot of Carter. He took out his pocket knife, cut the rope and advanced toward the plane. Halfway out on the runway he was picked up and escorted back by two Secret Service men. He was welcomed by the other photographers who shouted, “Way to go Ruh!”

Even after 30 years his competitiveness still drives him here on campus.

If another photographer, taking photos for their own pleasure, gets in his way while he is trying to shoot, he can get aggressive. “I’m not going to push them hard, but I’ll say ‘excuse me’ and I’ll go and get my shot,” Ruh said. “Certain times, oh yeah, I get pushy. I think every photographer gets pushy. You have to, you really have to.”

The 61-year-old, dressed in a green corduroy shirt and tan pants, sits in his office crammed with photographic equipment, lit by a single desk lamp and the light coming in through the windows on a cloudy day. Little white messages are posted everywhere, filled in with dates and events for photo-assignments; rows of them line the wall to the left of his desk and one is attached to the side of his lamp facing his computer.

Ruh is also competitive when it comes to badminton. Rick Meyers, assistant vice president for marketing and communications, has been over to Ruh’s house numerous times for his Notre Dame parties which always include a few games of badminton.

Meyers can’t help but laugh at how intense Ruh can get during the games. Most of his colleagues, including himself, are just messing around, but Ruh takes it seriously. “He’s diving and it’s like, ‘Man are you kidding me? You’re going to kill yourself for this stupid game.’ But he totally brings it to the table. He lays it all out there,” said Meyers, who was hired on the same day as Ruh.

“I’m the champ,” Ruh said about the badminton games. “I beat them all the time.”

He’s also the champ of photography. In January, Ruh took home five awards from a convention for the Kentucky Professional Photographers Association (KPPA) including Best of Show, a Kodak Gallery Award and a first place portrait of Dr. W. Vernon Hicks Jr., an NKU chemistry professor recently named the 2008 Cincinnati Chemist of the Year by the American Chemical Society.

Ruh hasn’t always been big on sending his photographs in for contests. It’s getting them published that matters most to him. He enjoys being able to capture “that one instant that really expresses that moment of time.”

Ruh enjoys a challenge. When he finds time, he will look for feature shots. He will start out by picking a building and then begin at the bottom or top floor and work his way through. Dressed in casual clothes, trying to fit in, he walks the length of the hall, peeking in doors to see if he knows the professor. Once he finds one he does, he stands in the hall, head down, bent over his camera, preparing it to take shots in the lighting conditions of the classroom. He tries to be as quiet and undisruptive as possible.

“I don’t try to be a pain in the ass,” he said. “Actually, I want to be a person that can sit there or stand there and they don’t see me.”

Even after 30 years, Ruh still feels intrusive and has to remind himself, “OK, this is your job, don’t worry about it. Just stand there, do what you got to do.”

So he waits for a good moment, approaches the professor and asks for permission. He then steps back and looks for a photograph. Once he sees one, he rushes over and takes the picture before the moment is lost. Otherwise, he asks for permission and then shoots. Ruh is comfortable with his subjects, talking to them as he photographs, making them smile and laugh as he gives them directions.

With his face scrunched against the camera he kneels down, then stands on his tippy-toes, trying to find the perfect angle, and presses the shutter button.

Afterward he uses the microphone on his camera to record a quick, 60-second, interview to get the subject’s name, age, where they’re from, what class they’re in and what they’re doing in the photograph.

The start of a career

Ruh remembers the day he decided he wanted to be a photographer.

While in the Army in Germany from 1966 to 1969 with the 32nd Army Air and Missile Defense Command, he was introduced to his first darkroom. He bought a camera and developed his own prints for the first time that very same week. Ruh was able to get off-base on weekends to bike around Germany and visit England, France and Amsterdam, snapping photos as he went.

But Ruh’s interests in photography developed long before that.

“It goes back to when I was a kid; I did video,” said Ruh. Shooting mostly with 8mm film, Ruh would videotape his family, but most of the time he taped his model airplanes while he flew them. Ruh continues to builds model airplanes today.

After this semester, Ruh wants to retire and start freelancing. But Meyers thinks he won’t. “I don’t think he’ll ever leave. He likes it too much.”