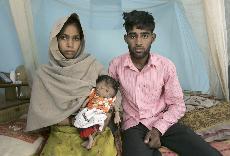 A baby with two faces was born in a northern Indian village, where she is doing well and is being worshipped as the reincarnation of a Hindu goddess, her father said April 8.

The baby, Lali, apparently has an extremely rare condition known as craniofacial duplication, where a single head has two faces. Except for her ears, all of Lali’s facial features are duplicated – she has two noses, two pairs of lips and two pairs of eyes.

“My daughter is fine – like any other child,” said Vinod Singh, 23, a poor farm worker.

Lali has caused a sensation in the dusty village of Saini Sunpura, 25 miles east of New Delhi. When she left the hospital, eight hours after a normal delivery on March 11, she was swarmed by villagers, said Sabir Ali, the director of Saifi Hospital.

“She drinks milk from her two mouths and opens and shuts all the four eyes at one time,” Ali said.

Rural India is deeply superstitious and the little girl is being hailed as a return of the Hindu goddess of valor, Durga, a fiery deity traditionally depicted with three eyes and many arms.

Up to 100 people have visited Lali at her home every day to touch her feet out of respect, offer money and receive blessings, Singh told The Associated Press.

Village chief Daulat Ram said he planned to build a temple to Durga in the village.

“I am writing to the state government to provide money to build the temple and help the parents look after their daughter,” Ram said.

Lali’s condition is often linked to serious health complications, but the doctor said she was doing well.

“She is leading a normal life with no breathing difficulties,” said Ali, adding that he saw no need for surgery.