This ‘dark side’ blasts off an A+ 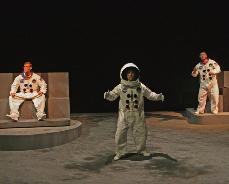 Provided by the Department of Theatre and Dance 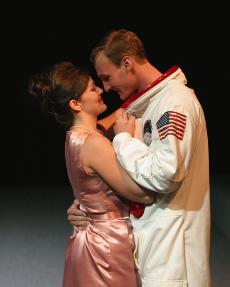 hotographs provided by the Department of Theatre and Dance

Beware parents; this is not a play for the children. Foul language, infidelity and tragedy encompass the theme of this play that can be best described as Armageddon meets Forest Gump. “Darkside” is Northern Kentucky University’s latest theatrical performance, which debuted Oct. 26.

The tight, enclosed setting of the Stauss Theatre allowed for a more intimate feel for patrons of the arts at the sold-out performance. The play consisted of only seven characters and one set throughout its entirety. Luckily, the outstanding use of lighting helped convert the round stage into a moon, a dance floor, a beach and a party setting.

The story centers on three astronauts who are a part of the fictional Apollo 18 space launch. The dilemma begins when two crew members separate from the space shuttle and land on the moon, leaving fellow crew member, Bill Griffin (John Scheller) to orbit alone while they conduct research on the moon. The two stranded astronauts, Gunner Smith (Timothy Rhoades) and Ed Stone) Charlie Roetting,) spend most of their time awaiting reply from Houston Capcom, voiced by Ricky William Glore.

As Bill spends hours upon hours alone and in space, he floats in and out of dreams, recalling the final days before the crew left for their mission through space. Recollections of an affair with Ed’s wife, Gigi Stone (Emma Robertson,) a party rejoicing in the friendships of the fellow crew members and the times spent with his wife, Beth Griffin played by Samantha Wright, haunts the lonely astronaut. Filled with entertainment, comedy and tragedy, this play offers a little something for everyone under the moon.

The set was simple, with only lighting to add dimension. The costumes were limited to one per character. The background music was fantastic and the acting was some of the best work I have ever witnessed from the NKU’s Theatre Department.

The classic music of Frank Sinatra and the charisma of the cast allowed this less than appealing plot to become an entertaining, entrancing and enjoyable production. It wasn’t the pulling-teeth kind of experience I was expecting.

It was the heart-tugging ending scene and the glorious setting, which made the audience feel as if they were floating alongside the lonely astronaut and looking down upon earth, that really sold this play and gave a lasting memory to those who experienced it.

If you are willing to make your way through the maze of the first floor Fine Arts Building to find the Stauss Theatre and you don’t mind being a little intimate with the cast, then it’s worth seeing. This production isn’t Shakespeare, but it’s a good drama to fill a boring evening. So leave the house, scrounge up some change from the couch cushions and venture into the “Darkside.”