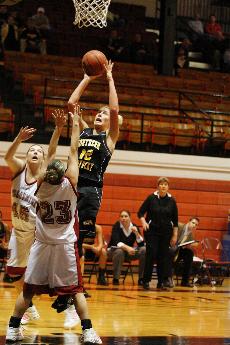 The road was a difficult one for the Northern Kentucky University Women’s Basketball team as it dropped away games to Bellarmine 73-60, Feb. 19 and to Kentucky Wesleyan 74-66, Feb. 21.

The two losses dropped NKU (18-7, 11-6 in the Great Lakes Valley Conference) into a three-way tie for first place with Indianapolis and Bellarmine.

In the game with Bellarmine (19-9, 11-6 in the GLVC), the Knights held the Norse scoreless for the first seven minutes of the game, cruising to a 13-point win. NKU only shot 34.3 percent from the field, breaking a five-game winning streak.

Head coach Nancy Winstel felt that the Norse were taking too many outside jumpshots and not looking for the inside game. She said, “I don’t just blame the guards, I also blame the post players, who needed to step up.”

For the Norse, senior center Angela Healy led the team with her 12th double-double for the season with 19 points and 12 rebounds. Junior forward Cassie Brannen added 11 points and blocked three shots.

Bellarmine jumped out to an early 9-0 lead, not allowing a point to NKU until junior guard Jessie Slack hit a jumper with 12:55 in the first half. NKU pulled to within eight at halftime, 32-24.

The Knights pulled away at the start of the second half with a 13-6 run, building a 45-30 lead with Bellarmine never looking back from there.

If you guessed it couldn’t get worse, guess again. NKU lost its second game in a row losing to Kentucky Wesleyan.

The Panthers were led by LaTasha Henry and Laura McClintic with a combined for 50 points in the game, as Kentucky Wesleyan knocked the Norse out of first.

“No. 11 Henry really has been a good player for four years,” Winstel said. “Cassie Brannen has guarded her really well for the past three years, but Henry got the best of Cassie. She decided it wasn’t going to happen.”

McClintic hit four 3-pointers and finished the game with 20 points.

“No. 14 hits the three really well and we just needed to double down and it just didn’t happen,” Winstel said.

The Panthers repaid the favor to the Norse, who defeated Kentucky Wesleyan, 65-44 Jan. 19 at Regents Hall.

The Panthers turned a 38-36 deficit early in the second half into a 12-point lead with 13:35 left to play. Kentucky Wesleyan grabbed 14 offensive rebounds to outscore NKU 15-3 on second-chance points.

NKU will conclude the regular-season March 1 at Lewis.