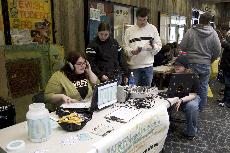 WRFN, Northern Kentucky University’s online student-run radio station, was flushed out of the bowels of the University Center and directly on to the University Center’s plaza level on Feb. 20. The station usually resides in the bottom of the UC and was exhumed for its first live remote location broadcast of the year.

From 11 a.m. to 3 p.m., students and faculty members could drop by for some complimentary candy, send requests or tune in to WRFN’s own ‘ear’gasmic selections. The station’s DJs also held a vote for their new name.

“It brings awareness to the campus and reflects the fact that it is a student-run station,” Medley said.

WRFN broadcasts live shows Monday through Saturday and has a prerecorded playlist for Sundays. Some of the artists featured on WRFN include The Cold War Kids, Yosefa, The Talking Heads, Timbaland, Country Joe and the Fish, Violent Femmes and The Rolling Stones.

Although it’s starting small, the newly-dubbed WRFN Norse Code is motivated, with plans for expansion in the near future; including covering sports events as well as freshman orientation.

“We’re done being a glorified P.A. system, we want our name out there so people actually know we exist,” Simmons said.