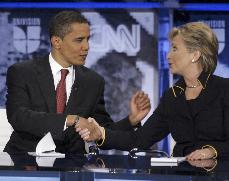 Good God – it’s come to this. Ohioans will decide America’s future in both the primary and general election.

In case you haven’t been following, the Republicans have finally settled on a nominee: John McCain, the veteran Senator from Arizona.

The Democrats, on the other hand, are running around like a pack of donkeys with their heads cut off as both frontrunner candidates take turns trading blows. While the others have bailed out, Hillary Clinton and Barack Obama are still fighting over who will claim the Democrats’ nomination.

As for the left wing, pretty much every pundit is saying the same thing: If Obama wins the March 4 primaries, during which the crucial swing state of Ohio votes in addition to the conservative bastion of Texas, he will put the nail in Hillary’s already empty coffers. If she wins, then the Obamamentum could hit a brick wall.

Any combination of victories, however, would likely extend the vicious debates to the August Democratic National Convention, where the superdelegates will have the honor of infuriating half of their base.

Thanks, America. You’ve now handed the steering wheel over to a state known for its horrible drivers – and elections.

One such example was in Kenyon College, where The Washington Post reported that our fellow students had but two voting booths for the district, despite a surge in voter registration. There, some students reported waiting as long as 10 hours to vote.

Then, Secretary of State Jennifer Brunner announced Dec. 15, 2007 that Ohio’s voting machines might not work as intended, and could be easily tampered with, ohionewsnow.com reported.

“To put it in everyday terms, the tools needed to compromise an accurate vote count could be as simple as … using a magnet and a personal digital assistant,” she said.

New election machine standards Brunner put into place mean that, with the changes she’s demanded, Ohio may not be prepared for the 2008 general election, The Cincinnati Enquirer reported Jan. 21. Those new rules would run up a bill of about $6.5 million in just the Ohio’s tri-state counties.

Now, I’m not saying Ohio’s the craziest state. Utah could easily take that cake, and Florida can match our voting woes.

But Ohio is certainly the most schizophrenic state. All eyes were on it in 2004, and the media refrained from calling our state, even while they did call Florida and Pennsylvania. Half the state is a deep crimson, while the other is a midnight blue. We say the voting machines are easily tampered with, but then say we’re not going to fix that until after a critical election. We’re the crazy cousin of America who’ll call you out of the blue, or in some states red, and offer to take you out to dinner.

Or ask for drug money.

Deciding the primary and national elections is too much responsibility to give to one state, especially considering Ohio’s cracked-out voting issues. A single, national primary, with perhaps a smattering of small states just beforehand to give long-shot candidates a chance, seems much more equitable than the staccato process we have now. It would also simplify things, which can only help a state as easily confused as Ohio.