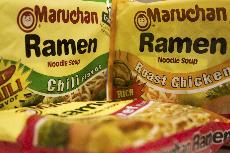 For many college students, Ramen noodles aren’t just a staple of their diets, it’s the stapler, the box of paperclips and the glue stick keeping their lives from falling apart.

At 10 cents (or less) a meal, many students find it hard to find fault in the noodle-plus-seasoning-packet equation. But according to Kohinoor, a food company that specializes in authentic Indian cuisine, that’s just what students are doing.

“Blame it on the worldliness of the Internet generation or the abundance of fine dining eateries in virtually every community, but most college students, young professionals, and contemporary parents now choose flavor and quality ingredients over the fat, salt and carbs common to fast food and convenience dinners,” Kohinoor said in a press release.

Add to this the dangers of the food additive Monosodium Glutamate, and many students have decided to turn to alternative foods.

“MSG, or monosodium glutamate, is a ‘flavor enhancer’ used to improve the taste of sweet, salty, bitter or sour foods. Instant noodle makers use it to make their shrimp flavors “shrimpier” and beef flavors ‘beefier,'” CNN reported in an article on the popular college food.

“Because I’m a parent, I’m really big on all that. More so than most people, I think,” said Robinson.

Many people are affected by the negative effects of MSG and don’t even know it because of its sometimes subtle effects, according to WebMD.com.

Side effects include headaches, tightness of the chest, numbness in the neck, preasure around the jaw area, mood changes and even heart palpitations.

The additive MSG can also be found in a number of foods that are not prepackaged, including many of the foods found in the typical Chinese food buffet.