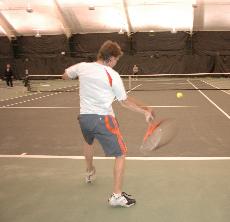 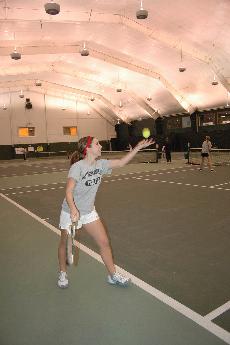 Get out your rackets. The 2008 Tennis season for Northern Kentucky University is about to begin.

Norse Head Coach Geoff Crawford will have a young women’s squad this season and is looking at two of his top performers from the 2007 season to lead the team.

“For the women, I look to Emily Okerson and Jessie Issacs to be our leaders for this team,” Crawford said.

Issacs, a sophomore, was the Freshman of the Year in the Great Lakes Valley Conference last season and “will be one of the top performers this year for NKU,” according to Crawford.

Issacs went 14-2 overall individually and set the tone in the early group of matches compiling a 12-2 record in singles. She teamed up with Okerson in doubles, compiling a 13-3 overall record.

The women’s team has only one senior (Okerson) on the squad this season. Crawford said that one of the freshman to follow this season is Trisha Brink, a transfer from Northern Illinois and a McNicholas High School graduate who just became eligible within the last two weeks.

Looking at the 2008 schedule for the women’s team, Crawford feels optimistic.

“We are going to be competitive with everyone,” Crawford said.

Last season, an injury plagued women’s team compiled a record of 5-10 overall and 1-4 in the GLVC. The team did not qualify for the GLVC Tournament

“We had only four healthy girls at the end of last season,” Crawford said. “This year we look to be more healthy and it will be night and day as far as our depth.”

On the men’s side of the net, Crawford looks to two juniors to lead the men this season. Juniors Fritz Dlabik and Felipe Rosetti will be called upon by Crawford to be his top performers.

Rosetti, who played No. 1 singles last year, struggled to a 3-11 record. Dlabik, who played No. 3 singles, compiled a 9-6 record in singles. As a doubles team, Dlabik and Rosetti won five of their eight matches.

The men went 8-10 last season with a 3-1 record in the GLVC. The Norse lost their first round match against Missouri-St.Louis 5-0.

“We were just one match from the NCAA tournament,” Crawford said. “We were really strong in the GLVC. It just depends on the day and how you come in and play.”

Crawford is optimistic about the men’s prospects this year as well. The team’s toughest competition will come from Drury University, which was ranked No. 2 in the nation for much of last year, and Rockhurst University.

NKU tennis had its most successful season in recent years in 2003, when the men’s team went 22-6 overall and was undefeated in the GLVC. That same year, the women’s team won the conference championship, also went undefeated in conference and compiled a 20-4 record.

So can the teams in the next few years match the success of 2003?

“No question about it,” Crawford said. “We have a very successful recruiting class and we are looking good for the future.”

The Men’s Tennis team will open the season Feb. 16, as they face Grand Valley State in Indianapolis. The Women’s team will begin its season Feb. 22 against Abilene Christian at the Joyce E. Yeager Tennis Complex on campus. The first match is set for 11 a.m.