‘Fool’s Gold’ a treasure trove of laughter, romance and comedy 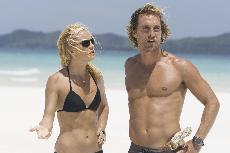 The quest for sunken treasure finds a trove of laughter for viewers in “Fool’s Gold,” starring Matthew McConaughey and Kate Hudson. Directed by “Hitch’s” Andy Tennant, the film is a light-hearted island romp teeming with witty one-liners, lively music and asinine situations.

Life just couldn’t get any worse for beach-bum-turned- treasure-hunter, Benjamin Finnegan (McConaughey). With his boat lying at the bottom of the ocean and his marriage to estranged wife Tess (Hudson) having run aground, Benjamin loses everything in his obsession with the Queen’s Dowry – 40 chests of Spanish treasure believed to have sunk during a hurricane in 1715. Add to that his debt to pseudo-thug, Bigg Bunny (Kevin Hart), and it appears that life for Finnegan has literally hit rock bottom.

Meanwhile, Tess attempts to make a clean break and start over while stewarding aboard the yacht of millionaire Nigel Honeycutt (Donald Sutherland).

This, unfortunately, is not meant to be as Benjamin, armed with a critical clue to the whereabouts of the mysterious treasure, charms his way onto the yacht through Nigel’s dim-witted daughter Gemma (Alexis Dziena).

Folly and fortune led the zealous Benjamin, reluctant Tess, intrigued Nigel and clueless Gemma on a bumbling treasure hunt that pits them against the nefarious, yet comical, Bigg Bunny and Benjamin’s rival Moe Fitch (Ray Winstone).

The chemistry between McConaughey and Hudson, while not as pronounced as in “How to Lose a Guy in 10 Days,” lends more of a comedic air to their characters’ relationship than a romantic one. The quirky pair play off one another beautifully and certainly constitute more than half of the film’s laughable scenes. With an equally entertaining supporting cast, the film provides one smirk-producing scene after another.

While it will not be competing for an Oscar anytime soon, “Fool’s Gold” does exactly what it sets out to do – provide a mindless escape from the stress of everyday life. It is not a film meant to make you think, except possibly to plan the location of your next vacation. It’s fun and pure mind fluff better suited for a quick laugh rather than a dramatic look into life’s complexities.