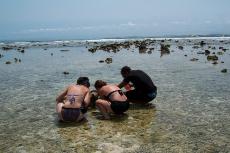 If the acronym CCSA doesn’t mean anything to you, then you’ve probably never been to the Office of International Affairs or considered traveling abroad.

But the Cooperative Center for Study Abroad, and the other international programs located within Founders Hall 301, aren’t something that every student knows about, even though it has been a part of Northern Kentucky University for over 25 years.

CCSA was founded in 1982 as a result of the Prichard Committee, a statewide education advocacy organization, and the concern for Kentucky’s international programs.

“We realized that study abroad wasn’t getting much emphasis in Kentucky at that time,” Michael A. Klembara, Executive Director of CCSA said.

“There was a report that looked at how universities could possibly share things, instead of everybody getting their own atom-smasher,” Dr. Klembara joked.

Students now have the opportunity to share faculty and services of multiple colleges. That is fortunate, as studying abroad is important to a student’s academic career, according to Klembara.

“Study abroad in general adds perspective, [it adds] so much more to learning,” said Klembara.

“I firmly believe that every student at some time when they’re [at NKU] try this, even if it’s a one week class to Mexico,” he said.

“The London trip was one of the best experiences of my college life. If given the chance, all students should do it,” she said.

But for most students, being able to afford school at all is a struggle, so the thought of studying abroad seems completely out of reach. But Klembara urges students to reconsider. “CCSA is among the best priced programs in the country.”

NKU has a number of scholarships available to students enrolled in FAFSA (Free Application for Student Aid).

Other options also exist to ensure that any student who wishes to study abroad can.

“There’s also a lot of other, smaller scholarships available that students can apply for. For instance, Professor Ferrante, she gives a scholarship from the money she gets from the sociology textbook she has had published and she gives the royalties she gets to us to help students study overseas,” Klembara said.

But students should hurry, the deadline for summer programs is Feb. 29.

CCSA, which originally consisted of five Kentucky schools, has grown to 24 and now includes Tennessee, is centrally located within NKU.

CCSA is not the only international program available from the Office of International Student Affairs. KIIS (Kentucky Institute for International Study, which deals with non-English speaking countries), a number of exchange programs, the alternative spring break and COST, student teaching overseas, are some other options.

Finally, any student who finds another program outside those currently available at the Office of International Affairs or wishes to customize or plan some other kind of international study experience is encouraged to come to the office and discuss their ideas. Klembara, and the others working in the Office of International Student Affairs, are always willing to help, but the first step is to get students to come and start planning. “Come in and talk to us,” said Klembara.