The Eye is sure to give you chills 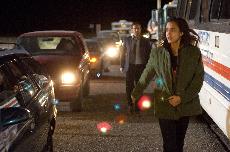 Seeing through another’s eyes takes on a whole new meaning in this week’s “The Eye” , starring Jessica Alba. A remake of the Chinese horror film “Gin-gwai,” the film tells the story of one woman’s reawakening from a cocoon of darkness into the confusing realm of light.

She quickly finds, however, that this blessing comes with a curse as dark visions threaten her relationships with others and leave her on the brink of madness.

The movie follows the journey that Sydney Wells (Alba) after receiving a cornea transplant, which has yet to become medically possible.

Sydney, the young violinist, was blinded by a childhood accident, she successfully undergoes a double corneal transplant. Her gradual adjustment to an overwhelming new world of color and movement takes an ominous turn as she begins to have terrifying visions of death and suffering. Racing against time and disbelief, she searches for the donor’s identity in hopes of gaining a better insight into the frightening visions. With this knowledge, however, comes important life lessons on belief, determination and hope.

Jessica Alba paints a very convincing picture of Sydney Wells. She is a successful, young woman disoriented by an unknown world of chaotic images that mercilessly assault her equilibrium. Her fear of the sinister predictions is palpable, yet she remains determined in her quest for understanding.

Alba’s Sydney is much more than just another undeveloped, two-dimensional character. Ranging from a star violinist comfortable in her world of darkness, to a frightened young woman confused by the new sights before her, each mood and emotion is brought to vivid life by the talented Alba.

The spotlight on Sydney appears to be a deliberate move by directors David Moreau and Xavier Palud. Other characters are strictly there to move the plot along while Sydney comes to terms with her situation.

She is the shining star while everyone else plays a minor supporting role. In addition to the extreme character focus, viewers are assaulted by dramatic in-your-face shots, blurred imaging and an intense concentration on sound. One truly sees the film through Sydney’s hazy perception.

While “The Eye” tends to remind audiences of such J-horror remakes as “The Ring” and “Dark Water,” or a little more loosely like “The Sixth Sense,” it also has its own unique brand of creepy. And while there is enough jump scenes and disturbing music to startle (or amuse) anyone, it doesn’t detract too much from the storyline.

The tension rises with each vivid close-up and with each twist of light, putting the film more into the category of suspense thriller rather than horror. It is certainly worth a view