Take bullies by the horn 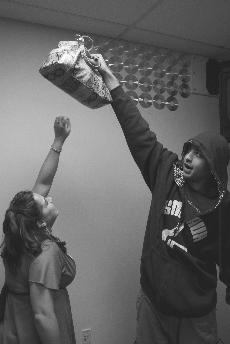 Harassment. Assault. Manipulation. What do these three things have in common? They are all areas of bullying and intentional harm to others.

Northern Kentucky University Residential Housing has taken steps to decrease bullying on campus in ways such as stating whether you are a night owl or if you like to get up early when filling out housing forms.

“We utilize a small list of questions to assist us with pairing students up that don’t indicate a roommate preference on their application,” said Peter Trentacoste, director of university housing.

Though Trentacoste notes that roommate conflicts are a natural occurrence within residence halls across the country. But residential assistants are equipped through training to be able to mediate and intervene in situations that require attention.

“However, whenever our department receives a report that alleges bullying, we intervene appropriately,” he said.

According to University Housing policies, threatening behavior that would cover acts of bullying is any statement, communication, conduct or gesture, including those in written form, directed toward any member of the university community that causes a reasonable apprehension of physical harm to a person or property.

Trentacoste said that any disruptive behavior that goes unchecked has the potential to affect someone negatively.

“Individuals that encounter bullying or other disruptive behaviors should report these instance in for action to be taken,” he said. “If (housing) doesn’t know about the incident, we can’t provide appropriate intervention.”

One area that is not taken lightly is the issue of theft in the dorms. Housing works with University Police with any investigation that involves theft.

“If a student was found responsible for theft through a campus judicial conference they would face possible removal from the residential community,” Trentacoste said.

He added that the campus is a reflection of the greater society.

“The same issues that we confront are often found outside the boundaries of campus,” Trentacoste said.

Even though instances like theft and fights could happen, Trentacoste added that safety is a priority for housing, with each of the residential communities having a residential assistant who works to create communities that promote respect and discourage hostility. However, RAs are trained to contact UP immediately in the event of any physical altercations.

If a residential student feels as though they can’t live with their roommate’s issues anymore, they can fill out a room change request with housing.

However, before resorting to that, Trentacoste said housing encourage residents to utilize housing staff to mediate conflicts.

Trentacoste offers this advice to any students dealing with roommate issues:

“Keep an open mind and be willing to compromise. Patience is a virtue and be sure to talk about expectations early to avoid built up frustrations that can show up later in the year.”