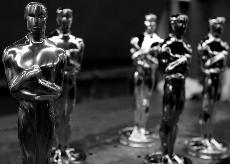 Film fans finally will soon learn who’s competing for this season’s Academy Awards. Now all we need to know is whether any nominees will turn up for the big show amid a writers strike that has thrown the awards season into turmoil.

The list of Oscar nominees Tuesday is expected to include such luminaries as Cate Blanchett, George Clooney, Daniel Day-Lewis and Angelina Jolie.

That smattering of talent alone would ensure that a lot of people at home would tune in to the Feb. 24 ceremony. But without the cooperation of the striking Writers Guild of America, celebrities might honor the union’s picket lines and stay away from the Oscars, leaving the show’s planners to either scrap the telecast or come up with some new form of Oscar ceremony unlike anything audiences have seen before.

The word around Hollywood is that the Academy of Motion Picture Arts and Sciences has a backup plan to put on the show without the blessing of writers and stars, but they declined to disclose details.

Gil Cates, producer of the Oscar telecast, has vowed the show will come off no matter what, hinting the program could be padded with clips from 80 years of Oscar history if writers and stars do not cooperate.

Officially, the academy says it is moving ahead with the red carpet and awards ceremony as usual.

“We are planning to have our show on Feb. 24 at the Kodak Theatre with an audience of 3,300 people and a television audience significantly larger than that,” said academy spokeswoman Leslie Unger.

Next to the Super Bowl, the Oscars are the most-watched annual broadcast in the United States. Last year, 40.2 million Americans tuned in to the Oscars.

The writers strike already took down Hollywood’s second-biggest film honors, the Golden Globes. With the guild planning pickets outside and declining to let writers work on the show, stars fell in line and refused to attend.

The swanky, televised Globe banquet was scrapped and replaced with a news conference to announce winners. No one showed up to accept awards in person.

If the Oscars were forced to go ahead with a show boycotted by nominees, a winner’s name may not be preceded with the traditional phrase, “And the Oscar goes to …”, but something more like, “And we’ll be sending over a courier to leave the Oscar on the doorstep of …”

Academy executives and ABC, which airs the Oscars, hold out hope the strike might be over before the awards. If not, guild leader Patric Verrone has said the union also will not allow writers to work on the Oscars.

Writers walked off the job Nov. 5 over their share of potential profits from programming on the Internet and other new media. Awards shows have become key ammunition for the guild to try to bring producers back to the table after negotiations broke down Dec. 7. Talks could resume as early as this week.

Yet the Academy Awards are a big step above the Golden Globes and other honors jeopardized by the writers strike, so some in Hollywood think the guild might relent and let the Oscars go on as planned if the strike lingers until then.

“It would be in the writers’ best interests to come to some kind of resolution, if only temporary, so the awards could go on,” said Richard Zanuck, producer of Oscar best-picture winner “Driving Miss Daisy” and the recent Golden Globe winner for musical or comedy, “Sweeney Todd: The Demon Barber of Fleet Street.”

“Canceling the Academy Awards is something almost too big to contemplate. Any sympathy toward them in my estimation would evaporate.”