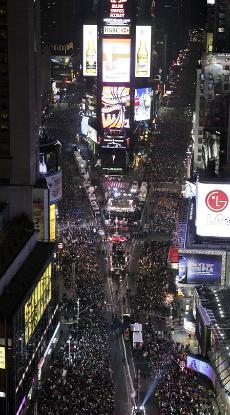 A new year has arrived and with it resolution upon resolution will be made that will inevitably become broken for so many of us. It seems as if New Year’s resolutions aren’t worth the toilets they are vowed over (those who partied a little too hard New Year’s Eve will be all too familiar with the nausea-induced promise). Which begs the question: If we haven’t stuck with any of our past resolutions, what is the point of making another one this year?

For those who want their New Year’s resolutions to usher a lasting change rather than the arrival of a new, unused treadmill in the basement next to the equally untouched Chuck Norris Total Gym set, follow these guidelines to keep your focus more reliable than Chuck’s “acting” career.

One of the first failings of many New Year’s Resolutions are unrealistic goals. If you only barely made it through your remedial math course, it might not be the best idea to take Calculus IA and IB in the same semester. Slow down a little; whom are you trying to impress?

If you can afford to break up your resolution to a smaller, achievable goal, go for it. That’s not to say there’s no good in shooting for the stars, but if all you’ve got is a bike, it might be a good idea to see if you can make it down the block and back first.

After you’ve got a goal you think is worth striving for, but which is difficult enough that it takes real effort (“Take down the Christmas tree before July,” as admirable as it may sound now, is not a New Year’s resolution), break it down into smaller goals. Some people can quit smoking cold turkey, but if that hasn’t worked for you, try quitting in smaller doses of turkey. If you smoke a pack a day, drop to a few, and keep dropping until you’ve reached your goal. It’ll actually feel as if you’re accomplishing something, and you’ll probably reach new goals you hadn’t even been planning on (after dropping from a pack a day to just a couple cigarettes, you’ll probably be that much closer to your goal to not sound like Darth Vader at 30).

It is definitely worth remembering what it was that caused former resolutions to fall through. If your resolution this year is to be around your family more, and last year you kept far away from your father because of his new wife, it might be time to ‘forget’ to invite step-mom to “Alvin and the Chipmunks.” The high-pitched screeching on the screen is more than enough; you don’t need it in the seat beside you as well, right?

Finally, if you fail, it’s not always the end of the world. If it’s halfway through the year and your goal was to get out of debt and you know it’s just not going to happen, revise your goal. Change it to “Don’t get further into debt” or “Get a little out of debt” or perhaps “Give up collecting rare Star Wars action figures, which is putting me in debt.”

If you’re not going to reach your goal, keep at it to ensure the entire effort was worth it. That way, next year’s resolution won’t be a carbon copy of the last 10 years worth of resolutions.

The entire point is that it’ll be a struggle, but not the same struggle every year. Remember, Rome wasn’t built in a day, and you won’t get built in a day either. Not even with Chuck Norris by your side.