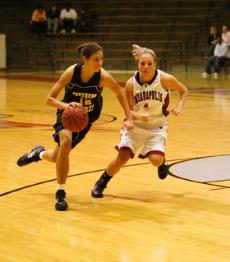 Is anyone else noticing a trend with the men’s basketball team since Dave Bezold took over?

Maybe “trend” isn’t the right term. The manner in which Bezold recruits is just different than what we’re used to in having Kenny Shields around for 16 years.

What Bezold is doing is utilizing players available from the junior college ranks as well as getting players who formerly played on Division I teams.

In Bezold’s fourth year as head coach at Northern Kentucky University, it seems like he has invested some of his recruiting in players that are in Highland Heights for only a year or two.

Some people may like it; others may look at his methods as a simple quick fix without developing enough talent in a four-year time span.

After all, Bezold swooped in and took Steven Wright right off the market after he left Bowling Green State University.

He also landed James Cripe from the University of Dayton, who provided just enough of an inside presence for last year’s team.

I think it’s safe to say that Bezold did not recruit these players. Though he was here for only one year, Wright was the most gifted athlete NKU has ever seen.

That’s not to say he hasn’t done both – he’s also developed players during a four-year period.

Since taking the reigns from the incomparable Shields in the spring of 2004, Bezold has combined recruiting players from the Division I level (i.e. Anthony Teague, Wright, Cripe and UC-Clermont transfer Brad Hosler) and inserting them into the system while taking local players and incorporating them into the program (Billy Finnell, Mark Hawkins, Travis Rasso) for a four-year period.

Dennis Gagai, a freshman from Ironton, Ohio, and transfer from West Virginia University, netted a career-high 25 points against Ferris State while shooting 9-11 from the field.

The two players NKU will rely on the most for consistent scoring are Division I transfers Vincent Humphrey (Valparaiso University) and Teague (University of New Mexico).

Bezold’s recruiting style has brought in a mix of local talent straight from high school, as well as fitting in players from the junior college and Division I ranks.

It’s his ruthlessness and impeccability in recruiting that has brought him most of his success while he has been at NKU as head coach and when he was assistant to Shields.

After all, how does tiny NKU make it to the Division II National Title Game in back-to-back years?

Shields, while deserving most of the credit, owes at least a chunk of it to Bezold.