Speaker calls for women to lead 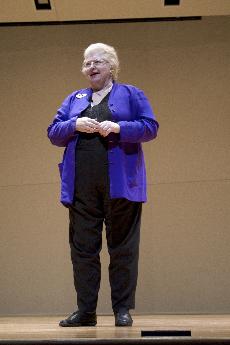 Inspiring women to gain roles in leadership came in the form of laughs and smiles from Sarah Weddington, who spoke at Northern Kentucky University Nov. 13.

Weddington, who at 26 argued the Roe v. Wade trial in from of the Supreme Court. She was also the first woman from Austin to serve in the Texas House of Representatives and was an assistant to President Jimmy Carter from 1978 to 1981.

Now, Wedding teaches at the University of Texas and travels around the country speaking about leadership at universities and conventions.

Weddington opened with an article she wrote for Time Magazine on the magazine’s 80th anniversary. Editors wanted an “80 Days in History” special and asked Weddington to write an article about the Roe v. Wade case. She said out of the 80 articles, only 10 were by women.

She said the next time Time Magazine does an article like that she hopes there will be a much bigger percentage of women.

Weddington began her career by learning everything she could. She said that she was the president of the Future Homemakers of America.

“It was one of the only things women could be a leader of,” she said.

As she moved into college, Weddington started in English. “I thought in college I would make kids love Beowulf,” she said but switched to law school. “I decided it would be easier.”

Dispite such setbacks, Weddington forged a successful career for herself and encouraged others to do the same. Weddington said that students participating in some leadership activities in college would be more important than any class.

“Sarah Weddington chronicles the history of the modern women’s rights movement,” Executive Director for the Activities Programming Board Kanita House said. “She reflects upon the advances women have made at all levels of society, and discusses the challenges that remain. Her speeches covers issues relating to leadership, self-renewal for leaders, women and leadership, and women’s issues.” Chela Alley, junior English major, said Weddington offers a lot of information to students. “Dr. Weddington is a good role model for women, especially younger women,” Alley said, “because she has achieved a lot in her life.”

There was a Q-and-A session at the end of Weddington’s speech where students asked about everything from public financing to abortion and the personal life of a leader.

When it was over, students from the Northern Right to Life passed out flyers to another event on Nov. 20 where Serrin M. Foster, president of Feminists for Life of America, will be coming to speak. The Educators for Reproductive Freedom and the Students for Choice were also passing out information.

Weddington said she was in awe of what young woman can do. “My hope is men and women will be partners in making changes,” she said.