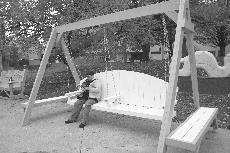 It’s big. It’s colorful. It sways. And, now that a bench policy has been put into place, the Kappa Delta swing is enjoying its last days as an A-frame.

According to Kim Vance, assistant director of student life and Greek advisor, the bench policy has been in the works since a fraternity bench was destroyed in 2005.

“The fraternity whose bench it was asked that all the benches be removed for a while to make a statement,” she said. “When it was time for the benches to come back, former Dean Kent Kelso requested that some guidelines be put into place to avoid a contest of whose bench was best.”

The policy was finalized Oct. 3, the same week Kappa Delta put up its swing.

“I don’t think Kappa Delta was trying to stir the pot,” Vance said. “It was all just a collision of timing.”

KD President Emily Zanitsch said that the swing was not an arms race to have the best bench, but merely something to bring the chapter together.

“Our old bench was in serious need of rebuilding and repainting