Free expression on the University Plaza 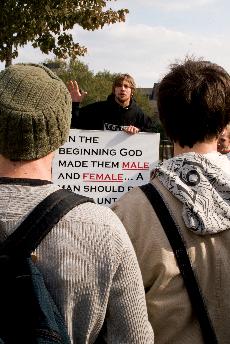 That was the basic message of a religious organization that started a second display on Northern Kentucky University’s campus Nov. 12.

Faithful Soldier, a group from the School of Evangelism in Milwaukee, Wis., made its second appearance holding signs featuring things such as “Love is not lustful, self seeking, manipulative and whatever feels good. Love is pure, sacrificial, committed and faithful,” citing 1 John 4:8.

Nicole Rinaldo, a student in the school, said the group came back to NKU because there was a good response when they first protested on campus Nov. 7.

However, some students didn’t understand why they came back to campus for a second time:

“God made everyone equal and (Storms) is sitting here degrading us for the choices we make,” said freshman undeclared Nikki Meaninch. “Who is he to judge us? He is not God himself.”

Student Sarah Enzweiler saw where Storms was coming from, but didn’t agree with how he was preaching it.

“We don’t mind he’s here preaching the word,” said Enzweiler, a junior education major. “Those of us Christians who know the word don’t agree with him.”

Dean of Students Matt Brown saw both protests as a good exercise of First Amendment rights. Brown said he didn’t know the group planned to come. However, under the revised Free Expression Policy, outside groups are allowed on campus as long as they don’t interfere with NKU’s educational environment.

The irony of the situation, Brown said, was that students were getting upset with Storms’ preaching, when they could have ignored him or walked away.

Overall, Storms was positive about the event; though there were mixed responses:

“Initially there was a lot of hostility