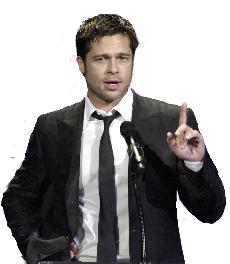 Brad Pitt recently spoke at a meeting of Clinton Global Incorporated Sept. 26 in New York City and instead of lady love Angelina Jolie beaming with pride, she spent the whole time glowering at his ensemble choice: a suit vest and white shirt, Life ‘ Style Weekly reported. “She accused him of dressing like a bar tender in a restaurant,” an insider said. “She even wants him to fire his stylists.” We don’t know if his stylists got the sack, but it appeared to the magazine that Angie had her fashion way with Pitt Oct. 5 when he came out of the Waldorf Astoria in NYC wearing a bright blue suit, then went back in and changed to a more sober brown jacket after Jolie whispered something in his ear. Pitt should move in with the Osbourne clan – they’ll let him wear hideous blue suits whenever he wants (because they’re all fashion senseless anyway)!

It’s time for a Lilo update. For those not in the know, I’m talking about America’s favorite party princess, Lindsay Lohan, who recently checked out of rehab (again), People Magazine reports. “She’s moving ahead with her life,” Dina Lohan (Lilo’s mother) told the magazine. But is she? After leaving the Cirque Lodge Treatment Center, the 21-year-old went straight to Salt Lake City’s Hotel Bar ‘ Nightclub where she downed a Socko energy drink and Fiji water and smoked cigarettes. ‘Cause that’s the first thing we all are desperate to do when we finally get out of rehab: hit up a nightclub – where Lohan can delight in peaceful reflection and quiet solitude. Not.

“I would adopt him any day. I’m such a dirty old cow.” -Sharon Osbourne on her love for Brad Pitt. (OK! Magazine)