Getting hungry for the hungry 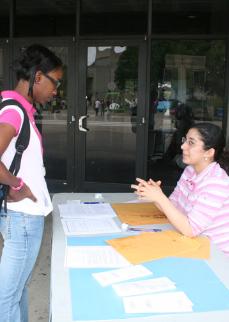 Going for one day without your daily Ritazza and Chick-fil-A might seem devastating, but for the students participating in the Fast-a-thon, the vittles-free day is worth it.

The Fast-a-thon, hosted by the Muslim Student Association Oct. 12, will be held from dawn to dusk to collect money for the hungry in celebration of Ramadan.

“At the end of the day we will be donating any money we raise to the Over-the-Rhine soup kitchen,” said Azra Husejnovic, president of the Muslim Student Association. The MSA’s current goal is $300, but the organization wants to raise as much as possible.

Although the event encompasses only one day of Ramadan, Muslims around the world will be fasting daily during the entire ninth month of the Islamic calendar.

“Fasting is not just an Islamic thing,” Husejnovic said. “All kinds of religions do it.”

For Muslims, Ramadan is a time to reflect on oneself and put an extra effort into the teachings of Islam. They also refrain from lying, stealing, anger, envy, greed, lust, sarcastic retort, backbiting and gossip during fasting.

“Obscene and irreligious sights and sounds are to be avoided,” said Zined Syed, the vice president of the Muslim Student Association. “Fasting shows Muslims to have self-restraint.”

The Fast-a-thon will begin at dawn and end at 7 p.m. with Iftar, the time when Muslims break fast – though not with the usual breakfast fare. The Iftar celebration will instead include dinner and two speakers from 7 to 9 p.m. in the University Center Ballroom on the night of the fast. The MSA collected pledges outside the UC Oct. 2 and 5, but Husejnovic encourages any students who are interested to participate even if they didn’t pledge.

“The group has been working to get together for about eight months, but it officially began at the beginning of the semester,” Husejnovic said. “It’s nice that (NKU) finally has a Muslim student group because it gives students a place to come together to share in, and talk about, Islam.”

Husejnovic added that the group currently has 22 members, half of which are Muslim.

Dean of Students Matt Brown also thought it was important for NKU to have an organization centered around Islam.

“Many other universities have had Muslim groups for years,” Brown said. “It’s important that we finally have one. It’s also indicative of our campus’ growing diversity.”

Syed agreed that a Muslim group is necessary to help people understand Islam because of the way media present its followers.

“(Media) link Islam with terrorism at the slightest event, even though it’s not related,” Syed said. “The MSA will help close the gaps (in understanding) that are created by the biased media and help provide information and gatherings to understand Islam.”

To participate in the Fast-a-thon or to join the MSA, contact Azra Husejnovic at Husejnovia1@nku.edu.