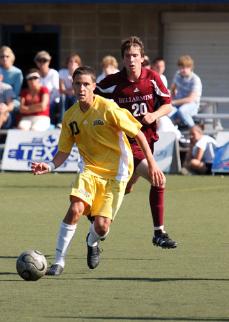 The Norse relied on two corner-kick goals from Eric Ashworth and Chad Cook, netted early in the first half in the first match against Missouri-Rolla,

Braden Bishop capped off the scoring with a second-half goal to give the Norse an eventual 3-0 shutout victory. Freshman goalkeeper, Michael Lavric, picked up his fourth career shutout. Head Coach John Balasyga talked about his team’s success with corner-kicks in the match.

“(Corner kicks) are something we’ve worked hard on the past couple weeks. It’s all about hitting a spot and getting your players to that spot.”

Coming up on the schedule, the Norse play host to Southern Illinois at Edwardsville on Friday, Sept. 28 and Quincy on Sunday, Sept. 30. Coach Balasyga talked about facing defending GLVC champions SIU Edwardsville.

“They (SIUE) have been the kingpins for many years. The last two or three years against them have come down to the last minute. It’s time to put up or shut up.”