NKU can’t be D-I for next four years 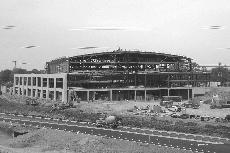 With the upcoming move from Regents Hall to the new Bank of Kentucky Center, Northern Kentucky University will have to put the idea of transitioning to Division I on hold until at least fall 2011.

The NCAA issued a moratorium Aug. 9, stating no school can move from any division for the next four years. With this decision, NKU will have a state-of-the-art- facility for next season, one of best sporting arenas in Division II.

When looking over the applications, the NCAA made the decision to temporarily keep schools from moving from division to division. With all the schools moving to other divisions, it is throwing off the tournaments and conferences.

To Jane Meier, NKU athletic director, it was better late than never.

“The moratorium decision by the NCAA is long overdue, with the influx of institutions making the leap were not prepared as well,” Meier said. “You need resources to make the move, including staffing, facilities, etc.”

Still, some schools that recently moved to Division I have had success with the transition.

“North Dakota State University made the move to Division I-AA, has the facilities to support a Division I program, and it has been a smooth transition for them,” Meier said.

But is NKU ready for the same treatment?

“Right now, we do not have the facilities or the staff for Division I status,” Meier said. “We would have to add another men’s sport or women’s sport in order to fit the requirements that the NCAA sets out for that status.”

NKU completed a review in 2005 regarding a possible reclassification and move to Division I. A renewed interest for the transition has been brought forth due to the funding of the Bank of Kentucky Center, NKU’s growing reputation, enrollment soaring and it being one of the two comprehensive universities in Kentucky and Southwestern Ohio to not be a sponsor of Division I athletics, according to the executive summary of the Division I review.

With the hold on applications to move to Division I, the Bank of Kentucky Center will bring in a bigger image of NKU for the future of the institution. The same holds for Jane Meier and NKU Women’s Basketball Head Coach Nancy Winstel.

“I think the arena does a whole for the community, but the program will also benefit with more people attending games,” said Meier. “The strength and conditioning area will be unlike what we have now at Regents Hall. Plus, the new facility will sell to recruits, making more for the programs.”

Winstel eventually sees the move from Division II to I for NKU, but believes it will not improve the athletic program.

“Some people think that you are less if you are not in Division I, but look at what NKU athletics has done in the past 25 years,” Winstel said. “A move to Division I will happen someday here, due to the growth of the university.”

Now, moving to Division I would be a change for NKU, including more media potential, but Winstel said it’s not without its woes.

If, or when, NKU makes the move, it would be ideal to be affiliated with a conference — especially the potential rivalries — means bigger things for the university, according to Winstel.

In the study conducted by the university, they examined the possible associations with Division I conferences, such as the Summit League and the Horizon League.

If NKU were to enroll as an independent, it would be difficult to put together a schedule that meets the requirements by the NCAA, possibly lowering the morale of the players during that transition period.

“The process may be long, but if you create potential rivalries and associate yourself with a conference, it will help soften the four years,” said Winstel. “To go independent is like committing suicide. You really have to get with a conference to carry out natural rivalries.”

So when watching NKU athletics, the rivalries it has with the Great Lakes Valley Conference will have to suit Norse fans for the present — and the future.