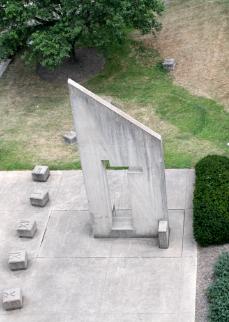 Our campus has seen many improvements over the summer months, in the form of a roundabout and newly-planted trees (yes, trees!) in front of the Fine Arts Building.

However, we shouldn’t get all caught up in the new face of Northern Kentucky University and forget one of the campus’s oldie but goodie attractions: the monumental sundial gracing the grassy knoll in front of Nunn Hall.

But why is it there in the first place? That’s the question The Northerner pestered Special Collection and Archives for about a week, and we think we have the answer. So sit back and relax as we take a little trip down NKU’s memory lane.

The sundial, or the Gnomium Polaris Nordum, came about after university president Dr. Frank Steely’s wanted to have a central point of reference for the new campus of Northern Kentucky State College. “This should be a visual as well as symbolic element,” Steely was quoted as saying in a memo penned by Dr. John P. DeMarcus to the faculty Aug. 10, 1972.

Addison H. Clipson, a partner in the architectural firm and designer of the first academic building on campus, took charge. An amateur horologist (the art of making instruments to measure time), Clipson looked at a campus symbol from a “space and time viewpoint,” according to the memo.

“The new campus will be a star in the crown of Northern Kentucky,” Clipson said, “so perhaps it would be very symbolic if this spot in the Commonwealth were pinpointed by a bearing on the North or Pole Star, so important to mankind for navigation, time-keeping and surveying.”

With that statement in mind, the monolith (the largest stone column) was designed with an integral sighting groove in the top surface, designed to precisely locate the North Star. The column also has built-in adjustments, so its 24-ton bulk can be adjusted to level and azimuth on the earth’s meridian. For that reason, at its beginning, the sundial could tell time within a few seconds.

Once built, campus architects placed the sundial at the center of the visual axes of the complex and came up with the name Gnomonium Polaris Nordum, from the word “gnomon,” the principal part of a heliochronometer; and the North Star, or “Polaris.”

Like everything else on campus, the sundial has texturing in the surface akin to the architectural concrete used in other buildings and structures.

There is a silver plaque on the sundial’s monolith inscribed with an Eastern Standard Time conversion table to correct apparent time (the sun and its shade don’t follow standard time for some reason). It also reads: “This instrument guides the light of the Pole Star via the sighting groove to this Northern Kentucky spot, Latitude 39 0′ 54″ N, Longitude 84 27′ 52.5″, thus marking the beginning of construction for this educational institution.” This is followed by a quote from the sundial’s mastermind Clipson: “Be it known to all men, of the high and noble purpose in the dissembling of knowledge from this particular place on earth during her continuing travels among the stars.”

By the way, surrounding the sundial is not twelve stones, as you’d suspect, but actually 15. Facilities management tells us that these three extra (numbers seven, eight and nine) could possibly be prototypes made by the architects to show university founders what the finished product would look like. However, at time of publication, no university records were found regarding the extra hour markers.