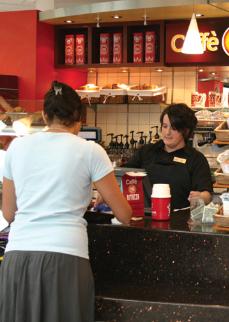 When Michael Nuttall’s paycheck was directly deposited into his bank account Aug. 10, it was already $150 overdrawn.

A few hours later, when the Northern Kentucky University junior went online to check his account balance after being paid, he was shocked to see nearly $600 in charges from the university’s food provider, Chartwells.

“It drained my entire paycheck,” Nuttall said. “I was devastated.”

The amount from Chartwells was an accumulation of charges from May until the first week of August, said Andy Meeks, the director of business opportunities for NKU.

According to Meeks, the charging delay was due to a “software glitch” in Chartwells’ system that held all debit and credit card transactions made through the food provider, rather than processing them. An employee found the error during a routine maintenance check at the beginning of August.

“After that, it was kind of a domino effect,” Meeks said. By Aug. 9, students’ accounts were being overdrawn with the charges.

“The worst part about it was that all of the charges were made individually,” Nuttall, a computer information technology major, said about his experience.

The individual charges resulted in overdraft fees for each purchase Nuttall made through Chartwells. Each time a charge hit, Nuttall’s bank charged him $25. Some students had up to 35 separate overdraft fees, which can vary depending on the bank.

Chartwells’ employees began to investigate the situation Aug. 13 and e-mailed all students stating that any overdraft fees would be taken care of by the company. Meeks said most banks are cooperating and canceling the fees, but refunds have been issued to the few students who still had fees.

More than 18 students have contacted Ed Devoid, the director of dining services, to ask for a fee reimbursement.

After the debit/credit card incident, more than 200 students used the social-networking Web site, Facebook.com, to come together in the new group “Stop Chartwells at NKU.” The group urges students to write letters to NKU President James Votruba, boycott Chartwells and possibly protest the food provider by picketing.

“Use the vending machines, pack your lunches, do whatever,” the group’s description advocates.

Students are also using the group to vent frustration with the situation and bad experiences with the company’s food.

Meeks, who is aware of the group, said the possible boycott isn’t causing any concern as far as he knows.

“I understand their frustration,” he said. “We’ve come to a fair and appropriate solution to this problem.”

NKU has requested that Chartwells take extra precautions and put software safeguards in place to prevent such an incident from reoccurring.

This is the first time an incident of this kind has happened at NKU that Meeks, who has worked at the university for 12 years, has dealt with.

Students who have suffered overdraft fees due to the delay in services should obtain a statement from their banks and bring them to Devoid in the University Center room 109A or call at 572-6036.