WTF: Don’t let this earth-powered pendulum swing you around 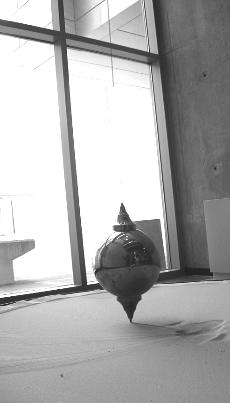 What’s long, slender and ends in a point?

Chances are, every person at Northern Kentucky University would have a different answer to this question, but this particular object dangles three stories from the top of the Dorothy W. Herrmann Natural Science Center. It’s the polished pendulum that sways to and fro, tracing a line in the sand beneath it.

Dubbed “Foucault’s Pendulum” after its French inventor, it doesn’t actually move beyond its back and forth swing or around the sand circle. Therein lies the illusion.

“The Earth is going around under it,” said Dan Spence, the planetarium coordinator and the pendulum’s caretaker. According to him, the solid brass weight at the bottom, called a “bob,” appears to travel three-fourths of the way around the sand each day.

The key to its controlled movement lies in reducing the number of forces pushing or pulling the pendulum, so that only inertia and gravity are acting on it.

When the forces are reduced, the bob hangs freely in space, swaying in the same direction while the Earth rotates under it, according to the Web site of the California Academy of Science, which made the apparatus. To prevent the cord that suspends the bob from spinning along with the building, the line attaches to a ball that turns and absorbs the rotation of the Earth, thus keeping the cord itself from twisting.

According to Spence, the longer the cable, the bigger the swing. The bob could continue swaying and keep its five-foot path for two to three hours without electricity. What keeps it going are magnets, which are activated when the cord interrupts a light beam that is similar to an automatic garage door’s stopping from closing when something crosses its safety beam.

However, powering this complex system requires only a few volts.

“The current is more like a flashlight battery’s than a car battery’s,” Spence said, noting that a third of the power goes to countering the sand’s resistance. Something this complex, however, is bound to have problems.

“A chaotic system breaks into chaos easily,” Spence said. “Even the tiniest tap can change the oscillation.”

An imperceptible touch can make the bob veer from its path by several inches. Even a minor disturbance can damage the delicate device, as has happened before.

“One of the faculty saw a student grab the cord and yelled at him. The student ran off, but the faculty member heard (the pendulum) clanking,” Spence said. He had to call a mechanic to come fix it.

Spence also stressed the gadget’s susceptibility to environmental changes. He recalled a fire drill where huge turbines, designed to funnel smoke out of a flaming structure, sucked the air out of the building.

When everyone returned inside, Spence said, they found the bob’s oscillation had grown several inches, into a large oval. Still, within an hour, it had returned to normal.

Since then, Spence has had relatively few problems with the pendulum. He hasn’t had to restart it since February, and hasn’t had any serious situations with students.

But he has had some humorous ones.

One person left a foot print, according to Spence, while retrieving something dropped into the pit.

Also, when the pendulum was first installed in 2003, Spence said people were tossing change into the pit.

“We were like, ‘If they keep this up, we’ll be able to pay for the maintenance.'”

Spence acknowledges the hypnotic beauty of the gadget, noting that he’ll often see people simply staring at the apparatus. He still cautions against messing around with it.

“It looks like an art toy; in reality, it’s a serious scientific instrument,” Spence said.

The pendulum’s power was first demonstrated by Jean Foucault in 1851 at the Pantheon in Paris, according to the maker’s Web site. While it didn’t have the magnets to keep it going, that wasn’t a problem.

NKU’s pendulum was ordered by the previous provost, who thought it would be a good visual demonstration of science. It joined the 98 other CAS pendulums around the world, including one at the U.N. Building in New York City and another at the Smithsonian Museum of American History.