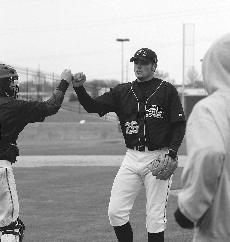 While the Cincinnati Reds are having some struggles, the Northern Kentucky University’s Baseball Team is putting together a strong finish to its season.

On April 22, the Norse (22-21, 19-11 Great Lakes Valley Conference) swept a doubleheader from the University of Wisconsin Parkside at Oberbruner Field. Starting pitching was key to both victories, as both Kevin Quick and Josh Lueke each pitched complete games.

After starting the season 1-9, NKU has gone on to win 21 of its last 33 games propelling the team to fifth place in the GLVC standings.

Lueke pitched in the first game of the doubleheader notching the victory for the Norse. He had nine innings of work, allowing three hits, one run, a walk and five strikeouts, improving his pitching record to 3-5.

The game was a tight one considering that NKU committed five errors in the game, yet the Rangers were unable to capitalize on the opportunities.

Both third baseman Matt Wagers and designated hitter Kevin Dusold led the Norse with two hits respectively, while also driving in both runs in the first inning.

The game was a much-needed win as NKU had dropped its two previous games against the UW-Parkside on April 21.

In the final game of the double-header, the Norse benefited from a five-hit shutout from starting pitcher Quick. He struck out four batters and walked one, improving to 3-1 on the season.

NKU leftfielder Jake Shaffer led the way at the plate going 3-for-4 in the wrap-up driving in and scoring a run. First baseman Evan McDole and centerfielder Jim Volpe had two hits a piece against the Rangers.

What seemed to be a desperate season for the Norse has become a season of fighting to defend its GLVC Title from last season.

With 10 games remaining on the 2007 schedule, the regular season championship is still within reach for NKU. Just one game back of University of Southern Indiana, if the Norse can take seven of those 10 games, they’ll have a legitimate shot at taking the crown. USI has to face second place Bellarmine University three out of the next six games.

Next for the Norse is a doubleheader matchup against the University of Indianapolis, April 25, at noon at Greyound Park.