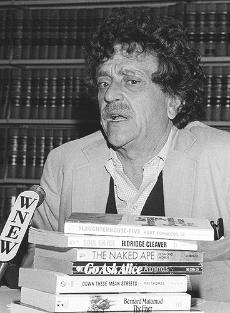 On April 11, the world lost one of the brightest talents it has ever seen with the passing of Kurt Vonnegut. While he leaves behind a work consisting of only 14 novels, his mark on literature cannot be overstated. This was an 84-year-old man who started publishing in 1952 and is still leaps and bounds ahead of his time.

I remember reading his short story “Harrison Bergeron” in elementary school. The impact the story had on me was enormous, and it illustrated that there was no end to the human imagination and spirit. It taught me that no one can decide your potential or draw your boundaries. It was the start of a deep passion for his work, as well as fiction in general.

“Slaughterhouse Five” is certainly the work by which he will be remembered most, and since his death I have read arguments that it should be considered one of the top 20 novels published in the English language. I can’t disagree. This work, set during the bombing of Dresden in World War II, came from Vonnegut’s personal experience. He fought in the war, and lived through the Dresden firebombing, witnessing this horrific event firsthand. The novel speaks of using a vast imagination to escape such soul-shattering events through the creation of entirely different worlds in the mind.

I had the honor of meeting this hero of mine many years ago. I professed my love for his work, and explained the impact he had on my life. He signed my copy of “Cat’s Cradle. And, unlike other personal heroes I have met, he was gracious, kind and funny. The man was an imaginative and literary titan, and you could feel it just standing next to him.

Within “Slaughterhouse Five”, there is a passage that illustrates the split between Vonnegut’s cynicism, love for humanity and his hatred for war as a man who lived through it: “Robert Kennedy