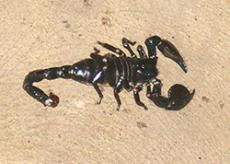 It has eight legs, averages eight inches in length and lives from five to eight years. It is native to Africa and can only survive in warm weather. However, one residential student came across this emperor scorpion near her dorm room.

Around midnight April 2, sophomore Moriah Tolliver found a scorpion in the breezeway of her dorm room at 2015 Sycamore in Woodcrest Apartments.

Tolliver, a nursing major, said she saw the scorpion as she was leaving her room to get her laundry.

“I looked down and it looked to be about seven inches long,” Tolliver said. “It looked fake.”

Tolliver said when she came back with her laundry and saw that the scorpion was still there. She asked neighbors about it.

According to Tolliver, a friend poked the insect with a stick, to see if it was fake, and it raised its tail and starting walking.

Tolliver then called her resident assistant to report her finding, placed the scorpion in a empty hair dryer box and turned it into the biology department on campus.

“There is a reason why we don’t allow pets in the dorm rooms and this is a good example why,” said Director of University Housing Matthew Brown.

The scorpion was given to biology professor Gregory Dahlem, who identified the scorpion. He said it is not dangerous and its pinch hurts as bad as a bee sting. The emperor scorpion’s venom is not usually dangerous to humans, unless allergic.

According to Dahlem, the scorpion is “definitely someone’s pet.” Because of the emperor scorpion’s low toxicity, it is the most popular scorpion in the pet trade.

He said the biology department is going to keep the scorpion and use it for the biology labs.

“I’ve worked in housing for over 15 years and I thought I’ve seen it all,” Brown said. “But something like this always surprises me.”