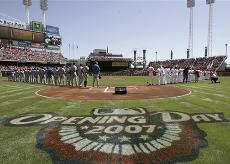 April 2 was the unofficial holiday for the tri-state area; Opening Day in Cincinnati. Even non-baseball fans can enjoy it. Countless employers and students took the day off to enjoy the festivities.

Opening Day is celebrated in Cincinnati like no other city. It’s the celebration of the oldest franchise in baseball, the Cincinnati Reds. Until the mid 1980s, the Reds were the first Major League Baseball regular-season game played. Now, with television contracts this has changed, but the pageantry has not. The day kicked off with a parade going through downtown Cincinnati. The streets lined with fans and the city was painted red, for the 88th annual Findlay Market Parade. This year’s Grand Marshal was former centerfielder Eric Davis. Tickets for the game were hard to come by, with them selling out in less than 30 minutes and this year’s tickets were all packaged into season ticket packages, which made it even harder. This year’s version of Opening Day had the Reds facing the Chicago Cubs, who are managed by former Cincinnati Reds’ Manager Lou Piniella. A sellout crowd of more than 42,000 fans filled the Great American Ballpark and saw a couple of new additions to the park. One was that the Reds planted a new thicker and tougher rye grass, replacing the Kentucky Bluegrass. The second addition fans saw was the Cincinnati Bell Technology Pavilion and Riverboat Deck located above the batters’ eye in centerfield. The deck resembles a riverboat and gives fans a spectactular view of the Ohio River and the downtown skyline. The pre-game consisted of a giant American Flag shaped as the U.S. spread out in the outfield as four F-16’s flew over during the National Anthem. The Mayor of Cincinnati Mark Mallory through out the first pitch and believe me it was a ball.

The Reds players took the field in their new all white with red lined old style uniforms. Aaron Harang who had got roughed up last Opening Day against the 2006 Cubs team stepped on the mound. Harang ended up pitching seven innings of one run baseball, an unearned run, due to an errant throw by Ryan Freel.

At the plate, Adam Dunn gave the Reds all it needed in the first inning as he deposited a Carlos Zambrano pitch in the lower right field deck, to give the Reds a 2-0 lead. Dunn wasn’t done at all as he hit another homerun off the smoke stacks in right field, which traveled 421 feet. The Reds coasted from there beating the Cubs 5-1.

It’s only one of a 162 games, but it’s a special game to win on a special day. Tradition is always the theme on Opening Day in Cincinnati and many old faces pop up this year’s opener.

The game also started a family like atmosphere in the booth as long time Reds announcer Marty Brennaman united with son Thom to call the action together this year.

A new baseball season, a Reds win, an 80-degree day and a day off, it doesn’t get any better than that.