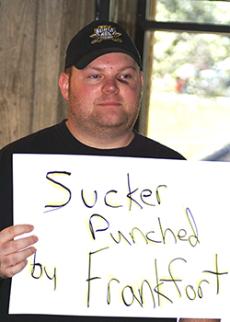 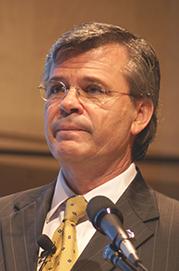 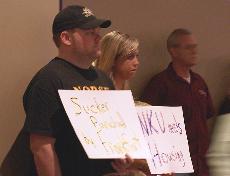 Kentucky Gov. Ernie Fletcher and Mark Birdwhistell, secretary of the Kentucky Cabinet for Health and Family Services, visited Northern Kentucky University ,Friday March 30., in the Otto M. Budig Theater, to discuss his “Get Healthy Kentucky” initiative and to recognize local efforts in the fight against obesity.

According to Fletcher, Kentucky has budgeted about one to one and half million dollars for this program. “(This program) is a challenge to local businesses and local governments to the challenge and focus on health,” Fletcher said. “By doing this it improves the quality of life.”

The presentation focused not only on the risks of being overweight, but also on the cost of medical care for illnesses due to obesity.

During the presentation, Birdwhistell said Kentucky is fifth in the nation for obesity prevalence and spends more than $1 billion each year on obesity-related illnesses such as type 2 diabetes, high blood pressure and heart problems.

Fletcher said the money that is being spent on such illnesses could be used elsewhere if Kentuckians would focus on getting healthy. “The bottom line is, we know what we need to do. We just need to do it,” he said.

Among those participating in the health and wellness of Kentucky is the Get Healthy Northern Kentucky coalition. This group was one of several groups that Fletcher presented an award to during his visit.

Awards were also presented to Step Forward Erlanger and Fitness For Life Around Grant County.

Fletcher also noted that NKU is the first university he has visited and it has had good results. He also noted that he is set to visit health departments, schools, the Chamber of Commerce and other “diverse set of venues.”

The Get Healthy Northern Kentucky coalition is led by NKU and Remke Markets. Saint Elizabeth, the Chamber of Commerce and other organizations have also partnered in this program.

The programs involved were recognized for their efforts to get local communities to lose a ton of weight, literally. The program, open to Northern Kentucky residents, began taking registrations March 29. The weight loss challenge will run April 19 through June 7.

A small group of students gathered outside the Otto M. Budig theatre to protest a bill that would have given the campus more housing.

According to Karen Campbell, assistant director of wellness at NKU, she contacted the governor’s office weeks ago to inform them about the coalition’s efforts in launching a regional weight loss challenge.