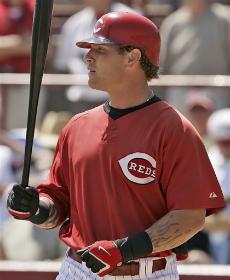 Fifteen minutes after the final out on Monday, most of the Cincinnati Reds were in the clubhouse or already showered and heading out the door. One player lingered on the field.

Josh Hamilton does this often.

He chats with fans, signs autographs, poses for photos – all the things he couldn’t do during the years fighting through a cocaine addiction that scuttled his career and put his life at a crossroads.

The 25-year-old outfielder is staying clean and sober. After going 1-for-3 on Monday, he’s also hitting .400 during spring training.

It’s more than Hamilton or anyone else expected.

After the dark years of addiction, Hamilton’s ability and his mettle are there for all to see.

Cincinnati decided to take a chance on Hamilton by selecting him in the winter-meeting draft. A former No. 1 overall pick by Tampa Bay in 1999, Hamilton spent years fighting drug and alcohol addiction away from the game. He didn’t play from 2003-05, and had only 15 games at Class A last season.

His performance has been amazing.

“He’s only had one or two at-bats that he’s swung at pitches out of the zone,” manager Jerry Narron said before Monday’s 5-0 win over Boston. “That’s pretty unbelievable for someone who hasn’t played much over the last two or three years. He doesn’t look like somebody that hasn’t played. He’s been pretty impressive.”

For Hamilton, it’s a godsend.

“I can’t imagine it going any better than it has,” he said.

There’s only been one bad moment all spring. During a 3-2 loss to the Blue Jays in Dunedin on Sunday, a couple of fans heckled him when he came to the plate, yelling about the “crack in your bat” and making other drug references.

“Yesterday was the first time I heard something negative from the fans,” Hamilton said Monday. “I’ve tried to prepare myself for it. Until you go through it like I did yesterday, you don’t know how you’re going to react to it emotionally.

Most people are pulling for him.

“If you put 100 athletes on the field, he’d be one of the 10 you’d notice.” said Chicago Cubs manager Lou Piniella, who also managed the Devil Rays. “Good for him _ as long as he doesn’t hit us too well when we open up against them.”

When the Reds and Cubs open the season in Cincinnati next Monday, Hamilton will finally arrive in the major leagues. He’s currently the No. 4 outfielder and can expect frequent playing time.

At the moment, his wife is more excited about the career breakthrough.

“Katie told me, ‘Honey, it’s one week. I’m so excited. Aren’t you excited?'” he said. “I said yeah, a little. I’m not nervous yet. I might be a little nervous when I step in front of 40,000 people on opening day. Until you experience it, you won’t know what it’s like.”

Spring training has given him an idea of how to manage life back in baseball. He doesn’t carry money or have his own car _ best to avoid the temptations. On the road, someone else will handle his meal money. He has to take drug tests regularly.

He has been drug-free since October 2005, something far more important to him than his career.

Those awful times occasionally come up during his chats with fans. He doesn’t avoid the past, figuring that by sharing his story he might help others.

“It’s all been positive,” he said. “Everybody says they’re rooting for me. Some people in the (alcohol or drug recovery) program come up and say, ‘One day at a time.’ It helps them to see me. It helps me to hear encouragement from them.”