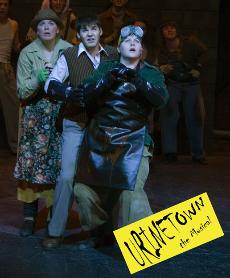 Contributed by the NKU Department of Theatre and Dance.

“Urinetown: The Musical” should come with a warning label – “Danger! Viewing may cause side effect of excessive laughter resulting in loss of bladder control.”

This pants-wetting, Tony-award winning musical is the first of the Department of Theatre and Dance’s spring semester and tells the story of a drought-ridden city where private toilets have been banned by the government. One mega-corporation, Urine Good Company, controls all toilets and successfully rules the town through extortion, government pay-offs and corruption. The people must pay to pee – bushes are strictly forbidden – and if they don’t, it’s off to the dreaded Urinetown.

But the people just can’t hold it anymore. Soon, the studly and pure-hearted “Bobby Strong” (Roderick Justice) emerges to lead the people in a revolution against Urine Good. Along the way, he meets Hope Cladwell (Denise Devlin), the innocent and busty daughter of Urine Good CEO Caldwell B. Cladwell (Timothy D. Rhoades). Sparks fly, love blossoms and potties overflow in Hope and Bobby’s quest to find a better way to live – free from the oppression of the evil toilet tyrants.

Director Ken Jones’ production is one of the funniest I’ve seen on the Corbett stage. On one level, the show is a musical for theater lovers. It’s chock-full of references to other shows – “Les Miserables,” “Fiddler on the Roof,” “A Chorus Line” and “Wicked,” among others. But on another level, it’s just a good-time satire that anyone can appreciate, regardless of theater knowledge. It’s about pee after all, and let’s face it: pee is hilarious.

Speaking of hilarious, the talented and energetic cast members put in stellar performances. A wacky chorus of disheveled and raggedy “Poor” forms a street crew of constipated rebellion. Seniors Devlin and Justice, who end their mainstage Northern Kentucky University careers with this show, are, as usual, terrific. Cary Davenport aims straight as Cladwell’s rotten, yet loveable stooge, “Officer Lockstock,” and Rhoades is a greasily convincing money-mongering sleaze.

“Urinetown” is part satire, part musical homage and all parts irreverent. It is unexpected and overflowing with updated toilet humor that feels smart, biting and, most importantly, goofy, all at the same time.